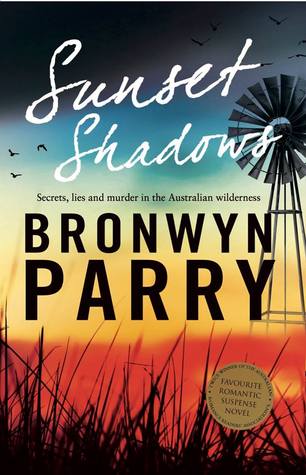 For police officers Steve Fraser and Tess Ballard, a split-second decision saves the lives of fifty members of a cult ­- but also puts their careers on the line. Tess’s work is everything to her; she’s forged a new life through sheer determination, so when her past returns to haunt her, Steve must race through wild country if he is to save the people he most cares about.

Sunset Shadows is not a straight whodunit. Yes, there are murders. Yes, solving them is central to the narrative. And, yes, the lives of Tess and those she cares about are threatened.

Neither is the book a straight romance, although there is Tess’s colleague Detective Sergeant Steve Fraser with his own secrets and his body solid, warm and protective against hers.

Sunset Shadows is both of these things and more. It is the story of a woman who escapes from a fundamentalist cult and works for sixteen hard, painful years to win respect as an officer in the New South Wales police force.

Tess’s hard-won liberation is challenged when her work brings her face to face with a hidden cult and with a religious fundamentalist from her past who believes she needs punishment for her sinful ways. Tess is confronted once again with the cultish belief that men have the god-given right to rule and women are their servants, sexual and otherwise.

Sunset Shadows is part of a loose series of romantic suspense novels set in Goodabri, a fictional region in western New South Wales. Bronwyn Parry’s books are rich in the heat and cold, the isolation and community, and the landscapes and towns of the Australian bush. Sunset Shadows is no exception.

Yet in an environment in which neighbour knows neighbour, a secret cult, led by the charismatic Joshua, seeks Bliss in the simple life. Life, as it turns out, is not just simple but cheap.

Tess and her fellow police officers become involved in the cult when the bodies of women dressed in the plain white of the group are discovered. Tess and Steve hurtle on quad bikes across the dark, soaked landscape when they learn that something else is about to happen in the community, something perhaps more frightening than the murder of two women. What they witness there and who they meet turn both their lives upside down.

Sunset Shadows asks what happens to a woman who leaves behind a closed, fundamentalist community and has to make her way, cut off from all she knows, in the alien outside world? For Tess Ballard it means telling herself over and over that no-one will control her again, that her life is her own, and that she can and will make it. It also means never compromising on her knowledge that a woman’s life must never be defined by her gender.

But is total escape possible? Are the deeply etched scars and the voices of self-doubt ever healed?

In answering these questions, Parry explores male domination, violence against women and female strength and resistance. She celebrates the local communities that pull together to ensure the safety and equal treatment of all their members. In doing so, she underplays the continuing and embedded sexism within Australia’s police forces and in Australian society more broadly, although this is a small criticism.

Sunset Shadows is a page turner. For readers of the earlier Goodabri  books it is a must read. For newcomers to Bronwyn Parry, this book may be the beginning of a new reading love affair.