The 3rd Victim by Sydney Bauer 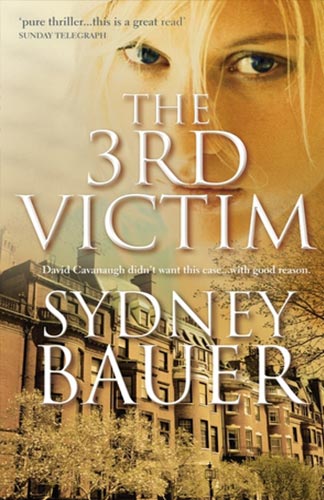 Author: Sydney Bauer
Publisher: Pan Macmillan Australia
Copyright Year: 2011
ISBN: 978-1-7426-1010-8
No of Pages: 520
Review By: Lesley Vick
Book Synopsis: This book is Bauer’s sixth legal mystery/thriller featuring the Boston-based attorney David Cavanaugh, his family, friends and colleagues. As in the previous five books the resolution of the long and involved plot (520 pages) is hard going for Cavanaugh. Not only has a child been gruesomely murdered and the incriminating evidence against her mother difficult to refute but the ambitious District Attorney – a longstanding antagonist of Cavanaugh’s – ruthlessly exploits the public’s horror at the crime. Even after Cavanaugh realises his client has been set up he cannot begin to imagine the truly appalling reasons why the child has been murdered and her mother cast as the villain. Nor is he cognisant of the looming danger to someone close to him.

Although there are numerous characters, many plot twists and a great deal of suspense the book is well-paced and cleverly written (Bauer’s experience working in film and television is obvious). The compiling of evidence (including significant DNA analysis), the exposure of lies and the revelation of motives is absorbing. Cavanaugh’s personal life, friendships and relationships with his colleagues are fleshed out too. This knowledge makes him a well-rounded character and the assistance given to him by his friends in the police force and the FBI in investigating the crime is convincing as a result.

The ending is both ingenious and unexpected even though some aspects could be seen as a bit far-fetched. There were also a couple of continuity problems that should have been picked up in editing. But overall, existing Bauer fans will not be disappointed and newer readers should be inspired to read the earlier Cavanaugh books.