The Adventure of the Colonial Boy – Narrelle M Harris 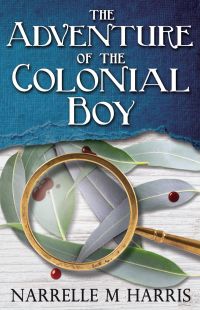 1893. Dr Watson, still in mourning for the death of his great friend Sherlock Holmes, is now triply bereaved, with his wife Mary’s death in childbirth. Then a telegram from Melbourne, Australia intrudes into his grief. “Come at once if convenient.” Both suspicious and desperate to believe that Holmes may not, after all, be dead, Watson goes as immediately as the sea voyage will allow. Soon Holmes and Watson are together again, on an adventure through Bohemian Melbourne and rural Victoria, following a series of murders linked by a repulsive red leech and one of Moriarty’s lieutenants. But things are not as they were. Too many words lie unsaid between the Great Detective and his biographer. Too much that they feel is a secret. Solve the crime, forgive a friend, rediscover trust and admit to love. Surely that is not beyond that legendary duo, Sherlock Holmes and Dr John Watson?

Being a Holmes devotee I welcomed a romp through the Australian bush with the great detective, who proves to be not dead at the Reichenbach Falls after all, and his associate Dr Watson. There is indeed mystery afoot in this well-told novel, which involves the dastardly remnants of Moriarty’s evil organisation, murders, torture and a red leech, a stolen jade treasure, and mayhem and bloodshed on a long ride between Melbourne and Ararat, before order is restored, and the pair return to the familiar rooms at 221B Baker Street.

Holmes has tricked Watson, who believes him dead, to join him in Australia to help clean up members of Moriarty’s gang, and, incidentally, to save his life, upon which several attempts have been made in London when Moriarty agents know Holmes to be on their trail. The characters remain true enough. Holmes in a couple of places gives the results of his startling deductions about people without us ever hearing how he arrived at them, which might be too much to expect, and there are references to past cases where Holmes demurs and says that Watson was too modest about his own part in the solutions. Love covers many sins. Mycroft Holmes plays an uncharacteristically active part in this novel, getting out of the Diogenes Club and taking care of business on behalf of his younger brother, of whom he is deeply fond. Finally, they are John, Sherlock, and Mycroft to one another, which strikes oddly a devoted Holmes reader chary of change, but thus it is. For any who love, as I do, Jeremy Brett’s evocation of Holmes, it is not quite the shock it might have been with the less sexually equivocal Basil Rathbone. I suspect still this pair still might have called each Holmes and Watson though, even in bed.

Other characters in Bohemian Melbourne and in London are outed sympathetically as same sex partners, living a lie, as they must, either cross dressing as the opposite sex, or remaining quiet and hidden, to avoid discovery. The general air of private tolerance, public shame, and terrible legal sanctions for ‘unnatural relations’ is invoked well and movingly throughout. The writing is sensitive, intelligent, and informed as to the modes of speaking, physical details, and mores of the times. The Epilogue sums up wisdom about the love inherent in intense and deeply-held friendship, which many feel to be sacrosanct and sufficient in itself.

‘John had not been able to keep the love from his stories, and whether those sentiments were perceived as those of a great platonic friendship or of a more romantic and passionate love, was not the upshot very similar? He had written adventures that were also, in the heart and soul of it, a great love story’ (p.225).

And so has Narelle Harris.  Would hardly work with Poirot and Hastings though.