The Brotherhood by YA Erskine 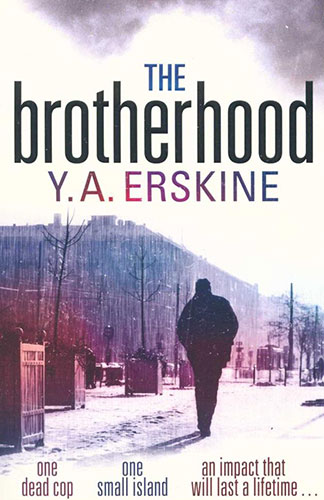 Author: Y.A. Erskine
Publisher: Random House Australia
Copyright Year: 2011
ISBN: 978-1-74275-015-6
No of Pages: 381
Review By: Kylie Fox
Book Synopsis:
Set in Tasmania, Australia, The Brotherhood begins as a respected cop, Sergeant John White, is murdered during a routine callout. As the investigation unfolds through the eyes of the sergeant’s colleagues, friends, family, enemies and the murder suspect himself, it becomes clear that there was a great deal more to John White than meets the eye.

Author Y.A. Erskine spent 11 years in the Tasmanian Police Service. She served as a detective in the CIB and as an undercover investigator. In her spare time, she was a member of the elite Protective Security Section.

Where to begin? How about – wow! Y.A. Erskine totally blew me away with the clever concept and execution of this story. I hesitate to use the “debut author” tag, because The Brotherhood would have been equally brilliant if it were an author’s tenth book – the fact that it is her first, only makes it all the more impressive.

Erskine breaks out of the mould of typical of crime fiction with her original (and quite brave) approach to telling this story. Each chapter is told from the point-of-view of a different character: the young constable, the seasoned detective, the wife, the lover, the accused. Each of these characters have their own story to tell, their own agenda and each is developed beautifully, as though this were a collection of short stories or personal memoirs.

Except that it’s not. Each story weaves a rich tapestry that completes the full story. The tale unfolds like a torch relay; each character sharing their own memories and passing the baton on until finally – miraculously – they come full circle and the cauldron is lit with a fiery haze of arrows.

Erskine, herself an ex-police officer in Tasmania, doesn’t shy away from any issue; no subject is taboo. Each of her characters has failings, each face their own form of corruption, drugs, lust, greed or power. Issues of politics, media and race relations faced by the police force are confronted with finesse.

The Brotherhood surprised me. I honestly didn’t expect it to come together so perfectly – at one point I was wondering why I needed to hear so many mundane details of a character’s life. What about the murder? But I was wrong, those details were far from mundane, each of them critical to the telling of the whole story and all of them related to the events surrounding the crime.

I finished this book in the wee hours of morning and then couldn’t sleep – I so desperately wanted to share this book with someone. I sat in my bed, muttering to myself like a mad woman, “oh my God, oh wow!”

I cannot speak highly enough of this book or of its fantastic author – a new force in crime writing has emerged.