The Children of the King by Sonya Hartnett 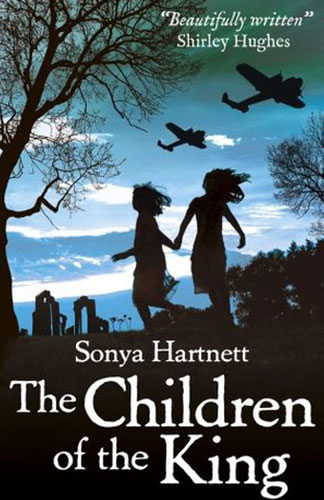 Author: Sonya Hartnett
Publisher: Penguin/Viking
Copyright Year: 2012
ISBN: 9 780670 076130
No of Pages: 266
Review By: Sue Nankervis
Book Synopsis:
Three children have been sent to live in the countryside safe from the war in London. When they find two boys hiding in a castle, the past and future come together to make an extraordinary adventure.

Sonya Hartnett is one of Australia’s national treasures. She feeds the mind and soul with beautifully crafted stories which are lyrically written. Characters step off the page, and reality and fantasy are both so sharply clear that the border between them is blurred, and the reader accepts passing from one to the other as completely natural.

This is a Young Adult book, and Hartnett gives her readers the respect of not making concessions to modern sensibilities. She doesn’t dumb down language or over-explain historical events – there is an expectation that her readers will be literate, informed and can work things out for themselves.

There is a slight flavour of C. S. Lewis or E. Nesbit at the start, as the children, Jeremy and Cecily with their mother Heloise, leave London as the bombing intensifies, to go to stay with Uncle Peregrine on his large estate in the depths of the countryside. Daddy, an important cog in the War Ministry, is left behind to defend the country. They travel on the same train as a group of evacuee children (albeit in a First Class carriage while the masses travel in Third, of course!) The slightly simple Cecily insists that they choose an evacuee to take in, so the very astute May joins the family at Heron Hall.

While playing in the ruins of Snow Castle in the grounds of Heron Hall, the two girls meet two mysterious old-fashioned and arrogant boys who appear to be camping out there. Meanwhile, the war is not going well, and Jeremy is in agony that he is safely useless to his country. The tensions of the group living at the Hall are described exquisitely, with so much left unsaid, but felt so strongly by the reader. In order to relieve the tension, Uncle Peregrine starts a long process of telling the story of the Princes in the Tower to the children after dinner each night.

The story’s strands twine together, as the early days of the war are described and march alongside and within the story of Richard III’s rise to power. Power is the theme that Uncle Peregrine makes explicit, and which underpins the contemporary events.

This is a beautiful, layered story, which turns into a ghost story while being firmly grounded in reality. I highly recommend it for both young and older adults.