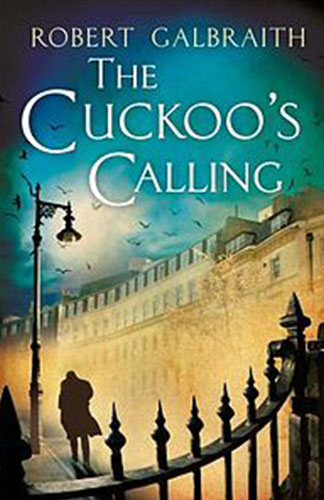 Author: Robert Galbraith (J.K. Rowling)
Publisher: Sphere
Copyright Year: 2013
Review By: Sandra Nicholson
Book Synopsis:
When a troubled model falls to her death from a snow-covered Mayfair balcony, it is assumed that she has committed suicide. However, her brother has his doubts, and calls in private investigator Cormoran Strike to look into the case.

Strike is a war veteran – wounded both physically and psychologically – and his life is in disarray. The case gives him a financial lifeline, but it comes at a personal cost: the more he delves in the young model’s complex world, the darker things get and the closer he gets to terrible danger…

Yesterday, I heard Vikki Petraitis (Sister in Crime/true crime writer) speak about the writing process and comment that in a gripping novel you have the main protagonist climbing great heights with people throwing stones at him/her with rabid squirrels nipping at his/her ankles! (Paraphrased but you get the gist) There also has to be lots of ‘and then’.
The Cuckoo’s Calling could be the source of these criteria. Cormoran Strike is an amputee war veteran who has just separated from his long time partner, Charlotte, and is now sleeping on a camp bed in his office, showering at the local university and living on take-away. He also has the financial obligation of his new temp, Robin Ellacott, who fortunately proves more than an able assistant, despite opposition from her new fiancé, Matthew. Strike appears to have no future at all as a private detective and then John Bristow comes into his life offering him a fortune to reinvestigate the alleged suicide of his adopted sister, Lula Landry. All the evidence has been tried and tested by the police and the Coroner has found it was suicide. Strike also believes that it’s suicide but he needs the money so agrees to the investigation which takes him into the lives of supermodels, a rock star, the paparazzi, the wealthy, the poor and lots more.
There are so many twists and turns and the reader is taken of a roller coaster ride – thrilling but at times scary. This book is truly gripping from the first page and the ending is an absolute surprise. I can’t wait for the next in the series.