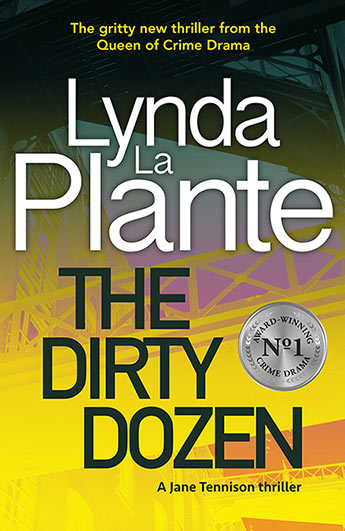 April 1980 and Jane is the first female detective to be posted to the Met’s renowned Flying Squad, commonly known as the ‘Sweeney’. Based at Rigg Approach in East London, they investigate armed robberies on banks, cash in transit and other business premises.

Jane thinks her transfer is on merit and is surprised to discover she is actually part of a short term internal experiment, intended to have a calming influence on a team that likes to dub themselves the ‘Dirty Dozen’.

The men on the squad don’t think a woman is up to the dangers they face when dealing with some of London’s most ruthless armed criminals, who think the only ‘good cop’ is a dead cop. Determined to prove she’s as good as the men, Jane discovers from a reliable witness that a gang is going to carry out a massive robbery involving millions of pounds.

But she doesn’t know who they are, or where and when they will strike…

It’s April 1980, London, and Detective Jane Tennison, 22, impulsive and plucky, has just been transferred from the Metropolitan Police to the Flying Squad, an elite and male-dominated branch of the Serious and Organised Crime Command. The first female detective to be posted to the squad in its 60 year history, Tennison is forced to navigate numerous obstacles to win the respect of her superiors and colleagues.

Altogether, I found the investigative aspects of the plot fairly routine, involving all the usual aspects involved in snagging crooks — surveillance, informants, working undercover. And for seasoned consumers of crime fiction, the detailed explanations of gunshot residue and rifling can seem clumsy, even naïve. But at the same time, the slower and less jaded narration seems to fit better within the 1980’s context.

For me, the key strength is the layered and intricate playing out of gendered themes. Sexism, and its rancorous sibling, internalised misogyny is calmly portrayed in a matter-of-fact and authentic manner. It’s brutal and goading to the point I wanted to start yelling, especially in relation to the relationship dynamics between Tennison and Katie, the squad’s administrative assistant, and only other woman permitted within the squad, bar the cleaner.

Then, by golly, La Plante introduces yet another fascinating twist, centred around the rationale for Tennison’s transfer; an effective promotion that left many of her fellow cops confused, bewildered. Apart from Tennison, that is. She knows exactly what she has to offer the squad: a keen brain and uncanny knack for solving puzzles.

Comprehensively hooked, I was unable to put the book down.