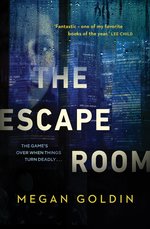 In the lucrative world of Wall Street finance, Vincent, Jules, Sylvie and Sam are the ultimate high-flyers. Ruthlessly ambitious, they make billion-dollar deals and live lives of outrageous luxury. Getting rich is all that matters, and they’ll do anything to get ahead.

When the four of them become trapped in an elevator escape room, things start to go horribly wrong. They have to put aside their fierce office rivalries and work together to solve the clues that will release them. But in the confines of the elevator the dark secrets of their team are laid bare. They are made to answer for profiting from a workplace where deception, intimidation and sexual harassment thrive.

Tempers fray and the escape room’s clues turn more and more ominous, leaving the four of them dangling on the precipice of disaster. If they want to survive, they’ll have to solve one final puzzle: which one of them is a killer?

‘Fantastic – one of my favorite books of the year.’ Lee Child

Anyone who writes knows that prologues are contentious. Publishers and agents often steer authors away from them, recommending other ways to get the party started. With Megan Goldin’s book, however, the prologue is an absolute corker. As soon as slapdash security guard, Miguel, sees inside the elevator of the supposedly empty building he is patrolling we know something very bad – and very exciting – has taken place.  When the ‘real’ story starts on the following page, the clock has wound back 34 hours and we are primed to discover exactly what led to Miguel’s grisly discovery.

This is only Goldin’s second book but she already counts crime writing juggernaut Lee Child as a fan. The turnaround between the two books has been swift, potentially explaining some of the shortcomings of The Escape Room. Still, they don’t distract from the fact that Goldin has come up with yet another great idea, set it in an intriguing world, and ended up with a page turner.

The author describes this book as a corporate noir thriller, a term I’m not familiar with but one ideally suited to The Escape Room. The cutthroat environment of the corporate world, especially at the Wall Street level where the financial rewards can be dizzying, makes perfect fodder for drama. What would you be willing to do and to sacrifice to get hold of the cars, the yachts, the homes and the decadent early retirement? What indeed have our four protagonists – Vincent, Jules, Sylvie and Sam- done? This question quickly emerges as the key to their current situation as well as the basis of the clues they receive to, hopefully, liberate them from the elevator.

Chapters alternate between the omniscient narration of ‘the elevator’ scenes and first-person accounts by absent team member, Sara Hall. By describing her personal experience working for Stanhope and Sons, one of the USA’s wealthiest investment companies, Sara also provides insights into the quartet stuck in the elevator. Through her we also discover the fate of a sixth, now deceased, member of the team called Lucy.

It’s very hard to talk about this book without spoiling the fun. Goldin sets off tricky little bombs at the end of many ‘elevator’ chapters. Just when you’re ready to switch out the light and go to sleep you’re nudged insistently to move on. There’s a conventional locked-room element to The Escape Room which is heightened by the confines and discomfort of the sterile elevator. As the reader, we’re pretty sure someone external has manoeuvred the four highflyers into this trap but, because they trust each other so little – for good reason as we discover – they suspect each other of being the instigator. This ratchets up the tension.

One of the other really appealing things in this book are the insights into the multi-million dollar Wall Street lifestyle. Goldin digs deep into the sacrifices a company like Stanhope and Sons requires of its employees but also shows how seductive the rewards can be. How much research or first-person knowledge she has I do not know but I fell hook, line and sinker for this world of amphetamine addictions, 18-hour work days and $100, 000 timepieces.

There are a lot of timely themes here, including the ruination of companies and loss of working class jobs in the name of mergers and acquisitions, not to mention the wholesale undermining of women in the workplace – where pregnancy equals career suicide and female administration staff are used as ‘gropable’ playthings.

Nothing gets covered in much depth here. The short chapters and pacey storytelling don’t allow for that and, let’s face it, this is a thriller not a political essay but I do find the best crime writing also offers up insightful and intelligent social commentary. Across the board there is a shallowness to this book that makes me wonder if it was pushed into publication too early. The tale is a complicated one and it is told well but also remarkably plainly. The language at times is downright flat, the metaphors predictable, as is the dialogue. The amount of characters involved makes it hard to get to know anyone too well. Often, we dip into an individual’s thoughts or recollections in a way that seems fairly random but necessary for plot points or context.

People often belittle crime novels by labelling them airport or poolside reading. Goldin is such a talent, some more time spent honing the prose would propel this book out of those categories, up to something more memorable. Still, she’s only two books in so who knows where she will take us?

The resolution to how and why Vincent, Jules, Sylvie and Sam end up in the elevator and what makes their situation morph from being uncomfortable and disturbing to brutal and life-threatening is wrapped up fast, real fast. And some of the explanations are pretty hard to swallow. Still, it’s exciting and fun and you can already imagine a filmmaker lapping it up. Fingers crossed Megan Goldin is sprinkled with some Liane Moriarty-style fairy dust and we see Sara Hall and her appalling workmates on the big screen soon.