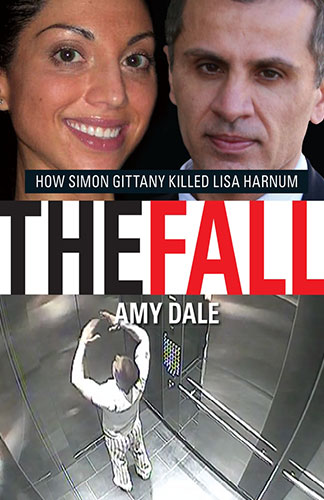 Author: Amy Dale
Publisher: Ebury Press
Copyright Year: 2014
ISBN: 9780857985330
Review By: Suzanne Bozorth-Baines
Book Synopsis:
A terrified woman runs for the door, her final effort to escape a cruel and controlling fiancé. She is too late. A secret camera captures him covering her mouth to suppress her screams as he drags her back inside.

69 seconds later Lisa Harnum is dead. But Simon Gittany insists he has done nothing wrong- he claims his beautiful partner died for a secret she feared would be exposed. The grainy final image of Lisa alive would later horrify a nation, a chilling reminder that the greatest harm can come to us from the hands of those we love. It was also the first hint police had that all was not what it seemed with the outwardly charismatic Gittany.

With only two witnesses to that final minute, one who can no longer speak, detectives question if they could ever prove a charge of murder.

A week later, a grieving, distraught mother in Toronto answers the phone. A man who looked up 15 storeys into the city skyline has come forward. And what he’s seen changes everything.
The Fall goes behind the headlines of the country’s most captivating court case to bring the story of how Lisa fell in love and grew to fear her fiance. It reveals that while Lisa couldn’t escape the danger of Simon Gittany she left behind clues to help catch a killer from beyond the grave.

In 2011 Amy Dale became chief court reporter for The Daily Telegraph. Through her position on the newspaper, she covered the arrest and trial of Simon Gittany who in 2011 threw Lisa Harnum from their 15th floor apartment balcony to her death.

Dale pulls no punches as she begins her true crime story with the actual fall of Lisa Harnum. She details the incident as if you were a fly on the wall, without prejudice, seeing all that occurred within the apartment and from witness accounts of the tragedy. She walks the reader through the interview of Gittany with police on the scene and his amazing revelation of cameras inside the apartment that might have recorded the action within minutes of Harnum’s death. From that point forward, it’s easy to guess that things may not be straight forward for Gittany. The reader is captured in this interesting dark and oppressive tale of love taken to extreme.

Dale traces the relationship of Harnum and Gittany as it began innocently enough in 2010. The couple’s love and tranquillity wasn’t to last long as the relationship developed into one of control, manipulation, and dysfunction. Extensive recorded phone and text messages to and from family members and friends, and between the couple demonstrated the dark path this relationship was taking. Both Harnum’s and Gittany’s pasts are explored which leads the reader, and the court, to speculate on the reasons their relationship soured.

Dale has done a masterful job of explaining courtroom procedure, from committal hearing to Supreme Court murder trial. She has also been supportive in the exploration of ABC employee Josh Rathmell’s testimony as well as other witness accounts.

The Fall not only traces the fall of a beautiful young woman from a great height, but the fall in self-esteem and self-determination of that young woman, and also, ultimately, the fall from grace of her murderer Simon Gittany.