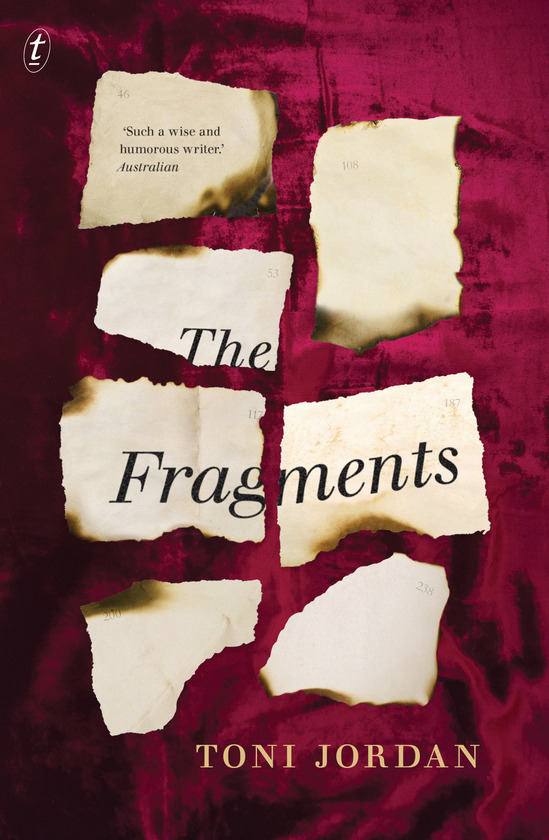 Inga Karlson died in a fire in New York in the 1930s, leaving behind three things: a phenomenally successful first novel, the scorched fragments of a second book—and a literary mystery that has captivated generations of readers.

Nearly fifty years later, Brisbane bookseller Caddie Walker is waiting in line to see a Karlson exhibition featuring the famous fragments when she meets a charismatic older woman. The woman quotes a phrase from the Karlson fragments that Caddie knows does not exist—and yet to Caddie, who knows Inga Karlson’s work like she knows her name, it feels genuine.

Caddie is electrified. Jolted her from her sleepy, no-worries life in torpid 1980s Brisbane she is driven to investigate: to find the clues that will unlock the greatest literary mystery of the twentieth century.

This is a literary mystery with strong female protagonists, a story told in two timeframes and on opposite sides of the world. It opens in Brisbane in 1986. A young bookseller, Caddie, is lined up at the art gallery to see an exhibition she’s been hanging out for. The Fragments is an exhibit of seven fire-damaged pages of a book the world had yearned for back in the 1930s.

The fire was found to be arson. The author, Inga Karlson, her publisher, Charles, and every copy of the book were destroyed by flames. Nobody else in the world had seen the book. All that was salvaged from the fire were those seven pages which were being exhibited around the world more than 40 years later. So why was it that an old woman, a complete stranger, was able to recite to Caddy the next part of an incomplete quote?

The second chapter introduces us to 10-year-old Rachel, a farm girl from Pennsylvania in the USA. It is 1928 and the Great Depression is about to hit. Rachel’s family is forced off the land and Toni Jordan’s description of them leaving the farm for the last time felt evocative and raw.

‘At the end of the drive the wagon turns along the long straight road that leads toward their new home, near her father’s new job and away from this field, this house, the whole of her world. On the hill in the middle distance under two oak trees are the graves of all the blood on her father’s side, sprinkled with white daisies.’

I loved the way each alternating chapter swung between Caddie’s story and Rachel’s. While Caddie was at the art gallery that chance encounter with the old woman reignited her desire to learn more about what happened to Inga Karlson. Inga had been an immigrant to the USA from Austria and her first book, All Has An End, took the world by storm. Jordan portrays her as an eccentric young woman, sometimes partying with the rich and the infamous, sometimes spending weeks in painful solitude.

Toni Jordan’s research was terrific. Her portrayal of New York when the Great Depression crippled families was believable and oddly moving. I loved the way Rachel’s character evolved, especially through her teenage years. It is especially poignant, and sometimes difficult to read, the way Jordan depicts the abusive relationship between Rachel and her father and the decisions Rachel makes as she moves through her teenage years.

It is through Rachel’s story that we learn about Inga Karlson and glean a sense of the USA throughout those years. Of political divisions, of people who were already aligning themselves with the ideology of the Nazis, and everyday life in New York.

Jordan’s treatment of Brisbane in the 1980s is equally well observed. She didn’t just tell us about the perfect weather and laid back lifestyle, she even managed to tip her hat to the police corruption that was endemic to that state throughout the 1980s.

The writing is beautiful in The Fragments. At times I found myself rereading a paragraph, feeling almost lost in it. I would love to share my favourite for this review but I can’t, it would give too much away. When I read it the second time, now knowing how the story ended, I had a lump in my throat.

A day after reading The Fragments I glanced at the book, still sitting on my kitchen table. It made me smile, and it made me happy I had spent some time eavesdropping on the world of a couple of incredible women, especially Rachel.

If you love a literary mystery, beautiful writing and an intriguing story I think you’ll love The Fragments. It’s a stunning book.