The Girl in the Mirror 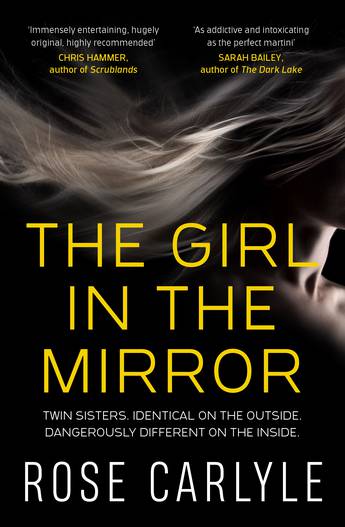 Identical twins only look the same …

Beautiful twin sisters Iris and Summer are startlingly alike, but beyond what the eye can see lies a darkness that sets them apart. Cynical and insecure, Iris has long been envious of open-hearted Summer’s seemingly never-ending good fortune, including her perfect husband, Adam.

Called to Thailand to help sail the family yacht to the Seychelles, Iris nurtures her own secret hopes for what might happen on the journey. But when she unexpectedly finds herself alone in the middle of the Indian Ocean, everything changes.

Now is her chance to take what she’s always wanted – the idyllic life she’s always coveted. But just how far will she go to get the life she’s dreamed about? And how will she make sure no one discovers the truth?Beautiful twin sisters Iris and Summer are startlingly alike, but beyond what the eye can see lies a darkness that sets them apart. Cynical and insecure, Iris has long been envious of open-hearted Summer’s seemingly never-ending good fortune, including her perfect husband, Adam.

Written with the chilling suspense of The Girl on the Train and Before I Go to Sleep, The Girl in the Mirror is an addictive thriller about greed, lust, secrets and deadly lies.

There are more curls and twists to this story than Nicole Kidman’s natural hair. I read it in one Saturday sitting, something I have not done in years. To be straight with the facts, I should admit this took place in locked-down Melbourne when I couldn’t traipse further than five kilometres and the thought of looking at one more television or computer screen was more than I could bear. Still…

Rose Carlyle’s The Girl in the Mirror is a rip snorter of a book, the kind of story you abandon yourself to when you want to escape anything resembling reality. Any review or coverage of the book seems obliged to describe it as a “one sitting” affair. In an interview in Carlyle’s native New Zealand even her Australian (Allen and Unwin) publisher Jane Palfreyman recalls she immediately sent it to her colleagues, saying, “Just do yourselves a favour over the weekend – if you’re looking for a great escape, here it is.” What more do you want to hear as a debut author keen to circumvent the slush pile?

The story of mirror twins, Iris and Summer, is fantastic and fantastical. Each is a literal reflection of the other. Summer has a higher right cheekbone to Iris’ left one, for instance, and even Iris’ organs are on the ‘wrong side’ of her body. You’re already seeing the picture here perhaps. Summer is like her name – attractive, popular, desirable. Iris, a twin who looks so like her sister that even their mother seems hard pressed to tell the difference, has nevertheless lived her life in her Summer’s shadow, feeling less than, feeling envious.

The Girl in the Mirror has the kind of publishing back story that writers’ dreams are made of, with a bidding war for international rights erupting and a movie version already in the offing. Reading the book, it’s easy to see why. It’s like ‘Dead Calm’ meets ‘Single White Female’. The tension is so taut you’re cringing in case it snaps and flings out at you while you read.

There is an overblown, 1980s ‘Dallas’ kind of atmosphere to the story – lots of very good looking, outrageously wealthy characters, sordid affairs, myriad offspring from different couplings and huge inheritances with horrendous strings attached. You may need to suspend disbelief before you hit the gangplank of Bathsheba, the beautiful yacht the twins try sailing from Thailand to the Seychelles, but once you do, it’s one hell of a voyage.

Of course, Carlyle is an honest-to-goodness yachtie type, having crewed on scientific expeditions and sailed with her then husband and their three kids across the Indian Ocean for a year somewhere back near 2013. I believe they went from Thailand to South Africa. Try home schooling on water. That must be a horror story in its own right, surely?

This unique experience means the author brings authenticity and authority to her writing about the yacht as well as the technical side of sailing and the lifestyle and community involved. Bathsheba itself becomes a key character in the story and the nomenclature around sailing is often detailed but somehow seductive, adding valuable believability when the story is hitting some of its more turbulent waters.

Carlyle’s pace is astounding. You whip through the story at breakneck speed, to the point where, when it slowed down, I sometimes felt myself skipping ahead, addict-like, to keep the buzz going. This is a shame because there is lovely language along the way that should be savoured.  For example, the book is written in first person from Iris’ point of view. At one point, when the chips are really down, she says, “Hope is a demon. It toys with you, it flirts, and when you start to trust it, it vanishes. It dies.”

Carlyle says her book rests on the idea of stepping into another person’s shoes: Could you? Would you? How would you?

It’s a trippy, tricky story with a lot of nastiness running through it, from ugly family dynamics, to financial greed, to petty jealousies and downright evil acts. The ending leaves your head spinning. I read it three times before I felt like I actually understood what happened. Still not one hundred per cent to be honest. But to be fair I was exhausted by then and needed a nap. Nevertheless, I could imagine the closing scene of the movie version. I could hear the audience gasp. And I suspect Carlyle has a hit on her hands.