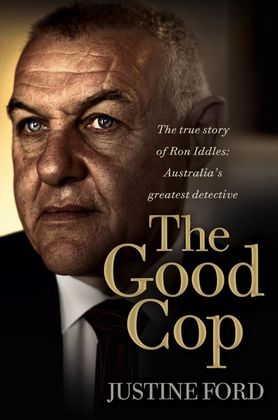 ‘A – Assume nothing. B – Believe nothing. C – Check everything.’ Ron Iddles

In an incredible twenty-five year career as a homicide detective, Ron Iddles’ conviction rate was 99%. Yet that only partly explains why Iddles is known to cops and crims alike as ‘The Great Man’.

Tough, inventive and incorruptible, stoic in the face of senseless horror yet unafraid to shed tears for a victim, Ron has applied his country cunning and city savvy to over 320 homicide cases – some of them the most infamous, compelling and controversial crimes in the nation’s history. To the victims of crime, Ron is both a shoulder to cry on and an avenging angel.

Ron Iddles never gave up on a ‘lost’ cause. He became a regular on the nightly news – the dogged face of Australian justice. Working long hours, dodging bullets, chasing leads and outwitting killers, Ron would tell his teams: ‘The answer is just one call away’. And in 2015, that belief saw him crack Victoria’s oldest unsolved homicide, yet another remarkable feat in a life devoted to keeping the public safe.

This is the extraordinary inside story of a real crime crusader. Ron Iddles. The Good Cop.

In this interesting and engaging book, author Justine Ford provides a detailed history of Ron Iddles’ long and distinguished career in the police force, working mostly as a homicide investigator. She outlines the many reasons why he has always been considered by most people to be ‘a good cop’. She tells Ron’s story in a way that enables the reader to feel like they ‘get know him’ and within a context of fascinating forensic detail. She also provides some interesting information about unsolved murders such as those of Jane Thurgood-Dove & Maria James.

Ron was a country boy who was fascinated as a child by TV shows such as Homicide and always wanted to be a detective. He went on to become one of the highest profile police officers in Victoria.  A key theme in the book is about the importance of having, as Ron did, a supportive and understanding wife and family. Most police, especially those in senior positions, have to be able available to work at short notice as well as be prepared to travel and be away from their family for periods of time, often at important family times.

Ron was the top of his class in detective training and went on to solve more cases than any other previous homicide investigators  during the same period. He investigated 320 murders and had a 99% clear-up rate, mostly through obtaining confessions.

He constantly worked on researching, developing and improving the effectiveness of his listening skills and interviewing strategies and taught his staff to use them as well. He always stressed the importance of treating everyone, even criminals, with respect. Crooks were prepared to talk to him, seeing him as ‘just doing his job’. He even assisted some of the people he encountered in his work to make better lives for themselves. Mark ‘Chopper’ Read, for example credited Ron with helping him later in his life to turn away from a life of crime.

The author details the many honours that Ron has been awarded for his police work, including The Chief Police Commissioner’s Ethical Leadership Certificate, the Australian Police Medal in 2001, the Policeman of the Year award in 2012 and an Order of Australia Medal in 2015

The book communicates in detail why Ron has always had a reputation for being a ‘Good cop’ in the eyes of colleagues, the families of victims and even criminals. She describes how Ron had a reputation for playing it straight with everyone, following the rules and never taking bribes and being humble and never big-noting himself. He always treated everyone with respect and empathy (even criminals), was a good listener, was prepared to go beyond the call of duty when needed, was a very hard worker and never promised anything that he couldn’t deliver. He was always available to provide ongoing support as needed to the families of victims.

Ron is a multi-faceted man and the author has highlighted some other interesting facts about him. While working as a detective Ron also had, at various times, several additional part time jobs which involved working with trucks, driving long-distance buses or working as a bricklayer’s labourer. This was done in part to provide for his growing family but also because he enjoyed it. Although he was always passionate about police work he also loved working with modern machinery and sometimes felt that he needed to do something different.

This is an interesting, informative and engaging book and I recommend it to anyone who is interested in the complex and successful work and career of one of Victoria’s top Homicide detectives. It’s a hard book to put down once you start reading it