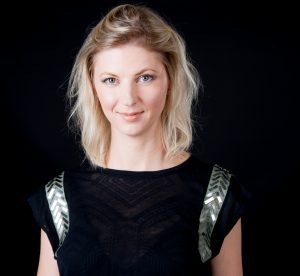 Sarah Bailey: When the premise of The Dark Lake first popped into my mind, I swiftly pushed it away. It was April 2015 and I was around 25,000 words into another manuscript, a story that I was really passionate about. 25,000 words was the closest I had gotten to a finished book and I was incredibly reluctant to ditch my growing story for a New Shiny Thing which was what I suspected The Dark Lake was.

I had been warned about Shiny New Things. They were sneaky and to be avoided at all costs if you ever wanted to finish the book that you had started with so much enthusiasm, but that had since lost its shine.

The Dark Lake was no doubt a trick, a trap, and luckily I saw right through it.

So, for a few weeks I successfully ignored the feisty young detective character that had rudely invaded my mind, and I studiously blocked out the brutal murder of her old classmate that was constantly creeping into my thoughts when I was supposed to be working or writing my ‘real’ book.

But in the end, it was so distracting I decided I would write the prologue. And then the first few chapters. And then, about a month later, I had written more of the manuscript that would become The Dark Lake than I had of the original one.

So it seemed it was decided: this was the book I would now focus on.

I was lucky to get through most of the draft without experiencing the dreaded writer’s block though I found the middle section pretty gruelling. And if I had known about the rewrites that were to come, I may have given up much earlier. But I was so passionate about the characters and the story that once I started, it felt somewhat inevitable that I would finish.

It felt like the writing process took a very long time but in reality, the first draft of The Dark Lake was completed in just over a year.

The Dark Lake is a technically a crime thriller but for me it’s always been a character-led drama. The character of Gemma Woodstock, the young, troubled detective who leads the murder investigation, is a complicated person and I wanted to present her in a way that garnered audience investment and empathy. Gemma frequently makes questionable decisions and is torn between the different life roles she fulfills so it was important to get the balance right between appealing and infuriating.

My favourite characters to read and watch are those that are layered, gritty and realistic so I am hopeful I’ve created my own version of this in Gemma.

The murdered woman, Rosalind Ryan, was also an important character. Mysterious and unusual, we see her initially through Gemma’s eyes but as the story unfolds we start to get some other perspectives that build out a more rounded, albeit strange, person. 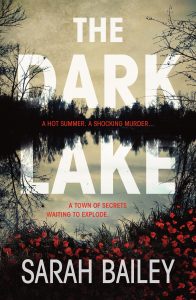 Smithson, the fictional town which provides the backdrop for The Dark Lake, borrowed severalingredients from a range of real Australian towns. I wanted a place that could support a thriving ecosystem across several generations but that could still feel claustrophobic and suitably gossipy.

It somehow all came together and in July 2016 I secured a publishing deal with Allen & Unwin. The world rights have since been sold to the USA, China and the UK. I am now in the very fortunate position to be working on a sequel, another book featuring Detective Gemma Woodstock. The draft is due at the end of July and all being well, it will be published some time in late 2018.

Unfortunately I have not yet had the chance to return to the original manuscript I was working on, though I am determined to finish it one day. I’m not sure if my path to publication is a lesson in following your gut instinct and giving permission to pay attention to Shiny New Things, but I’m certainly glad that in this instance I did!

Sarah will be appearing at our next event on July 21 at the Rising Sun Hotel in South Melbourne. Info and tickets via the link below.

Sea Change or Tree Change?: crime moves to the coast and country

Sarah Bailey is a Melbourne-based writer with a background in advertising and communications. She has two young children and currently works as a director of creative projects company Mr Smith. Over the past five years she has written a number of short stories and opinion pieces.

The Dark Lake is her first novel.