The Half-Child by Angela Savage 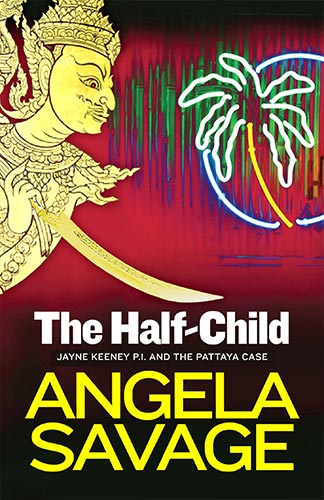 Author: Angela Savage
Publisher: Text Publishing
Copyright Year: 2010
ISBN: 978-1-921656-54-5
No of Pages: 322
Review By: Karen Chisholm
Book Synopsis: Jayne has been hired to investigate the alleged suicide of a young Australian woman in a seedy Thai coastal town.  But Maryanne Delbeck’s death is not the only mystery awaiting Jayne among Pattaya’s neon signs and go-go bars.  While working undercover at the orphanage where Maryanne volunteered, Jayne discovers something far more sinister.

Now her life is in danger, her case is still unsolved and she barely has time for dinner with her handsome new love interest, Rajiv.  With love and death both circling, Jayne now has two cases to crack – and very little time to do it.

Good crime fiction, for me anyway, frequently goes hand in hand with a spotlight on social issues. If it incorporates a good, strong sense of place and great characters that you can really feel something about, then even better.

THE HALF-CHILD is Melbourne author Angela Savage’s second Jayne Keeney book. This book is set in Thailand, but the focus this time is on the beachside resort of Pattaya, a strange combination of tourist resort, family friendly locations, sleazy bars and strip-joints. Jayne finds herself in Pattaya as she is hired to investigate the case of a young Australian woman who died there, falling from the roof of one of the tourist hotels. Jayne’s investigation involves undercover work, hiding the fact that she can speak fluent Thai, working at the most menial of volunteering tasks in an orphanage, coming to grips in a hurry with the way that this orphanage balances the care of local children, often with their single mothers working nearby in the tourist bars and strip-joints, with the requirements of abandoned or orphaned children intended for overseas adoption.

The impetus behind this story is overseas adoptions when unscrupulous people get involved, people who effectively are trafficking babies to unsuspecting foreign couples, desperate to adopt. Savage has not given herself a particularly easy subject to tackle. The book has to negotiate a minefield, illustrating the experience for everyone involved, careful to show the impact on all sides, whilst still maintaining an investigative imperative. This is not a book that lectures about the pitfalls, and there’s a part of the resolution of this complex emotional situation that’s possibly going to startle some readers, sadden and confront.

The other thing about these books is that Jayne, herself, isn’t a straight-forward character. She’s a little bit out there, unpredictable, upfront and frequently prickly, she’s no fool, even though she can get a little, let’s call it “over enthusiastic”. And perhaps that’s the only thing that might annoy some readers – what I’m calling “over enthusiastic” some may want to say teeters on the edge of crazy – but then I can see Jayne’s very much a “poke the bear / none of this let sleeping bears lie nonsense” sort of a girl. There are therefore times when you admire her, and times you want to slap her. Times you think she’s a raging idiot, and then she’ll be quite cunning. There’s even a little romantic tension – although Jayne seems to be alternatively intrigued, sometimes underwhelmed or just flat out indifferent.

It’s always interesting, with the second book in a series, to see what changes the author has undertaken in their writing, to look at the quality of the plot, and how the central character is progressing. THE HALF-CHILD is more assured than the first book, and as strange as it seems given the subject matter, a little more relaxed. There’s great humour, particularly in the personality of Jayne herself, who doesn’t take herself too seriously, and in that of her potential new partner, Rajiv, who provides some much needed patience and sanity in the face of Jayne’s more exuberant behaviour.

The great thing about THE HALF-CHILD is that reading this book, you can see there’s a lot more to be done with Jane.