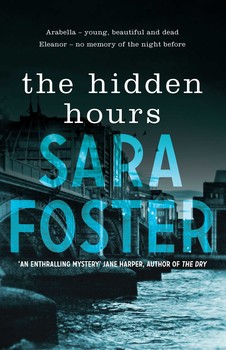 Synopsis:
Arabella Lane, senior executive at a children’s publisher, is found dead in the Thames on a frosty winter’s morning after the office Christmas party. No one is sure whether she jumped or was pushed. The one person who may know the truth is the newest employee at Parker & Lane – the office temp, Eleanor.

Eleanor has travelled to London to escape the repercussions of her traumatic childhood in outback Australia, but now tragedy seems to follow her wherever she goes. To her horror, she has no memory of the crucial hours leading up to Arabella’s death – memory that will either incriminate or absolve her.

As Eleanor desperately tries to remember her missing hours and uncover the events of that fateful night, her own extended family is dragged further into the dark, terrifying terrain of blame, suspicion and guilt.

Caught in the crossfire of accusations, Eleanor fears she can’t even trust herself, let alone the people around her. And soon, she’ll find herself in a race against time to find out just what happened that night – and discover just how deadly some secrets can be.

Eleanor is the centre of all the action in this suspense-filled, fast-paced and gripping novel, one of the best I’ve read so far this year.

Eleanor is 21 years old and her early life in Australia is marked with personal tragedies, which counselling and drugs have failed to help her move on from. At her mother’s suggestion, she moves to London and is invited to live with her Uncle Ian, his wife Susan and their two young daughters, until she gets on her feet. Susan even gets Eleanor a temporary position as a PA for Nathan, the publishing company owner’s son and a senior executive in the company. Nathan is a tyrant and bully. However, things are looking promising for her new start on the other side of the world to home, until the night of the office Christmas party, where Eleanor is given drugs in her drink by Arabella, Nathan’s wife. She knows Arabella has put drugs in both their drinks but she feels powerless to say anything and drinks.

Arabella is later found drowned in the Thames and the police suspect foul play. When Arabella’s death is announced at work the following day, Eleanor turns pale and feels sick, as this is the first time she is aware of the death. She knows that she was with Arabella the previous night but she can’t remember anything about the night after Arabella put the drug into her drink. All she knows is that Uncle Ian found her on the front step at 3am in the morning and she was wet from the rain and her she had dirt on her feet and face. When she looks in her handbag the next morning, she sees Arabella’s engagement ring and she has no memory as to how it got there and had intended to return it to her at work.

As a result of this tragic news, Eleanor starts to have flashbacks to her life in Australia. She starts sleepwalking again and no matter how hard she tries, she can’t remember the events of the night Arabella died. Will, her only friend from work, tells Eleanor that she tried to jump off the bridge and was rescued by several people, some from the party. The police also show her CCTV footage of her near where Arabella’s body was found in the Thames and although she can see it is her, it does not bring back her memory of the night’s events. After hearing of Arabella’s death, Eleanor is convinced someone is trying to frame her so when she is interviewed by the police she doesn’t mention finding the ring in her handbag. Her Uncle Ian begs her not to mention the ring to anyone, especially the police, as it will impact on his family, particularly his young daughters, as Susan may lose her job if Nathan finds out about the ring and the fact that Eleanor has it. Eleanor believes that her whole life has been lived around lies and she has reached the point where she doesn’t know who to trust as she tries to unravel her memory and uncover Arabella’s murderer.

Eleanor’s character is constantly present in the novel, moving the narrative forward at a great pace. Eleanor takes you on a roller coaster ride between the flashbacks of her life in Australia and the tragedies she endured and her struggle to remember what happened on the night Arabella died and what part she played in it.
The writing technique of italicised chapter beginnings, where the actions of minor characters are introduced, ensures that as the plot progresses the focus always remains on the main character, Eleanor.