The Inheritance of Secrets 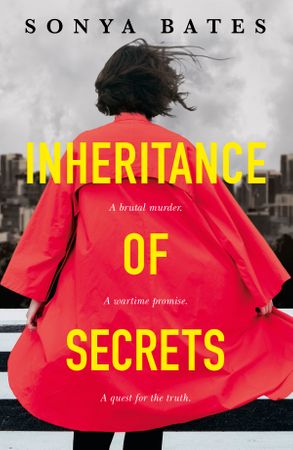 A brutal murder. A wartime promise. A quest for the truth.

No matter how far you run, the past will always find you.

Juliet’s elderly grandparents are killed in their Adelaide home. Who would commit such a heinous crime – and why? The only clue is her grandfather Karl’s missing signet ring.

When Juliet’s estranged sister, Lily, returns in fear for her life, Juliet suspects something far more sinister than a simple break-in gone wrong. Before Juliet can get any answers, Lily vanishes once more.

Juliet only knew Karl Weiss as a loving grandfather, a German soldier who emigrated to Australia to build a new life. What was he hiding that could have led to his murder? While attempting to find out, Juliet uncovers some disturbing secrets from WWII that will put both her and her sister’s lives in danger …

The Inheritance of Secrets is Sonya Bates’ first novel for adults – she’s the author of several children’s books – and in it, there’s a lot going on.

A double murder kick-starts the plot. The trauma-laden protagonist, Juliet, is a successful writer raised by her grandparents after her father died and her mother vanished. There’s a troubled and elusive older sister, an ambitious boyfriend, and a long-time friend, now a journalist, who suddenly reappears in Juliet’s life.

And that’s before we get to the Nazis.

Bates tackles her narrative from two angles: the contemporary efforts of Juliet to unravel the mystery surrounding her murdered grandparents, and the story of Karl, a World War II soldier from the wrong side who flees post-war Germany for a new life in Australia.

Drawing on insights from her own father’s past, Bates does a first-rate job of bringing Karl’s story to life. She vividly imagines the experiences of decent citizens under the Third Reich, performing their wartime duty, then struggling to survive in a world understandably more focused on supporting innocent survivors than those who fought for Germany. In telling Karl’s story, Bates is careful to have him empathise with the plight of Hitler’s victims.

Mostly, Bates makes this work, but there are times when Karl’s story, with its descriptive passages, slows the pace and dissipates the book’s momentum. However, Karl’s experiences are worth relating for their own sake particularly in modern times when the Alt Right is on the rise and white supremacists commit atrocities around the globe. It can’t be assumed there is a universal understanding of what Hitler was all about – three quarters of a century ago.  (The 2019 appearance on social media of high school students in California, doing Nazi salutes beside a swastika formed of drink cups, springs to mind). Karl’s story provides offers a valuable window into history.

I found the Juliet narrative a touch problematic. Elements are introduced which seem to be extraneous to, and distract from, the main plot. But overall, Juliet is a resourceful and relatable protagonist. Her struggle with the possibility that her beloved grandfather may have been a war criminal engages the reader.

Bates’s first foray into adult fiction is an accomplished and entertaining read. It will be interesting to see where she takes us next.