The Killing Hands by P.D. Martin 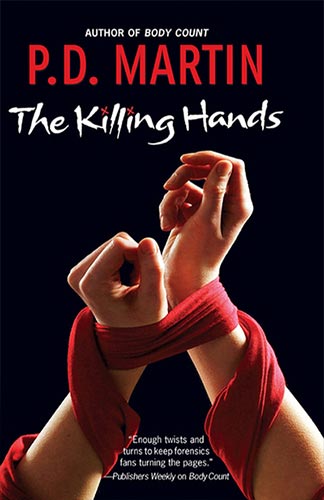 This novel is the fourth in a series featuring Sophie Anderson, an Australian criminal profiler working in the Los Angeles Field Office of the FBI. She is brought in to help solve the murder of an unknown victim whose throat was ripped out by someone or something that left no clue. As Sophie builds a profile of the killer, her knowledge of martial arts leads her to the shocking conclusion that he is a kung-fu expert who can perform the killing strikes known as the Ten Killing Hands. She must find the killer before he strikes again, a search that leads her into the deadly world of the Yakuza.

The book blends an unusually chilling story with the fascination of watching a criminal profiler at work. Sophie’s work methods and her links to other law enforcement agencies are explained in detail – something that will appeal to fans of law enforcement procedurals. Sophie’s skill at kung-fu leads us into the world of martial arts and it is here she comes to understand the killer’s methods. The writing style is focused and dialogue strikes a nice balance between American and Australian usage. Meticulous research by the author has resulted in an unusual and realistic thriller that traverses the worlds of martial arts, organised crime and the FBI.

However, the world of thrillers contains stiff competition from the top sellers. It is a market that takes no prisoners. Because this unusual story promised so much, I found its faults the more disappointing. Sophie’s psychic ability is a jarring note in this ultra-realistic setting. A psychic element can be integral to certain novels but here it sits uneasily with Sophie’s role and her pragmatic, disciplined personality. And seriously, how long can she keep slipping away to have one of her visions without her hard-bitten FBI colleagues noticing? Professional psychological profilers, as we know, do not need dreams and visions to form their hypotheses. Authors, however, sometimes resort to such devices to facilitate plot development.

Parts of the book are over-wordy and do nothing but add to its length, which is above average for a large format paperback. Phone conversations often contain too much ‘stroking’ – too much “how are you” and “thank you”, multiplied by two. This may be necessary in life but is dead slow on a page. I lost count of the number of times people enquire about Sophie’s health during and after her stay in hospital – again, natural in real life but ho-hum in crime fiction. Crime writers need to remember that on the page it’s cut to the chase. It’s the story, stupid. Frequent conversations with Mum need severe pruning or a mention in passing. Only the mother from hell has a role in a crime story. A thirties-plus FBI agent who lives in fear of her Mum from Melbourne stretches our credibility.

I have some personal advice for Sophie. Get real, toughen up, screw whoever appeals to you – there may be no tomorrow – and get over Mum. When you do you’ll be up there with the best of them.