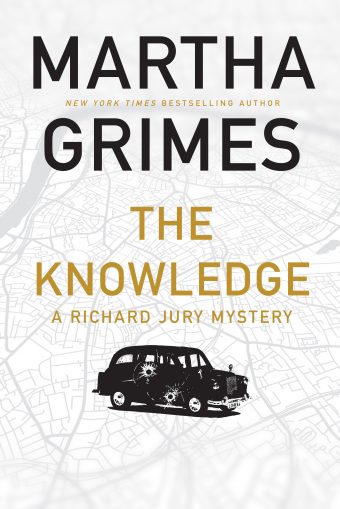 In the new mystery in the bestselling Richard Jury series, Martha Grimes brings London’s finest and ‘the Filth’ together on a double-homicide case that involves Kenyan art, rare gems, astrophysics and a long-fermented act of revenge.

Robbie Parsons is one of London’s finest, a black cab driver who knows every street, every theatre, every landmark in the city by heart. In his backseat is a man with a gun in his hand – a man who shot Robbie’s previous pair of customers point-blank in front of the Artemis Club, a rarefied art gallery-cum-casino, then jumped in and ordered Parsons to drive. As the killer eventually escapes to Nairobi with ten-year-old Patty Haigh – one of a crew of stray kids who serve as the cabbies’ eyes and ears at Heathrow and Waterloo – in pursuit, Superintendent Richard Jury comes across the double-homicide in the Saturday paper.

Two days previously, Jury had met and instantly connected with one of the victims, a professor of astrophysics at Columbia and an expert gambler. Jury considers the murder a personal affront and is soon contending with a case that takes unexpected turns into Tanzanian gem mines, a closed casino in Reno, and a pub that only London’s black cabbies, those who have ‘the knowledge,’ can find.

The Knowledge is the latest in the Richard Jury mystery series and, so, includes a great deal about London streets, pubs, food and the familiar collaborators – Melrose Plant and Marshall Trueblood. Those who are acquainted with the setup probably need read no further. This newest offering, however, begins with a seemingly unmotivated murder of a handsome US astrophysicist and his ethereally beautiful and intriguing wife –something Detective Superintendent Jury of New Scotland Yard’s CID regrets, because he had met the physicist and wanted to continue their acquaintance. There’s a bit of star-gazing, and philosophising about people who understand, and people who don’t.

The plot revolves around an African killer, who is a brilliant shot, by the way, many well-coordinated London black cabbies, a group of six improbably highly-organised children, all around ten years old, one of whom inveigles her way with the killer from Waterloo Station, where he is dropped off by a black cab driver, to Nairobi.

Plant is sent by Jury to follow up the Kenyan lead into a boutique mine of rare gemstones. He is found by an ingenious girl-child and encounters a group of fairly stock ‘comic’ safari guests at an upmarket game park where the most is made of his aristocratic title and connections. Plant rescues the girl from a leopard and they make their way into Tanzania, where they learn about gems and ways of smuggling them out of the country. They then return to London – not before time in Plant’s opinion.

In the meantime, Jury plants (no pun intended) Trueblood into the intriguing Artemis Club, exclusive the casino-cum-art dealership to find what he can. Naturally, he turns out to be a natural-born master of ‘twenty-one’.

It is a good tale, as well-told as ever, with some fascinating characters, side turns, and issues. One of these is the mythical pub, ‘the Knowledge’ which only cab drivers, who have passed the stringent test to get a licence to drive a London black cab, can belong to, or even know the whereabouts of: hence, the title, and the rigours they undergo to learn destinations, streets, and routes, which have always made me wish cab drivers in our major cities had to do, too, instead of having so often to be led to their destinations by frazzled passengers.

It’s well worth a cozy look, especially if you like London, black cabs, and eccentrics, not necessarily in that order.