The Labyrinth of Drowning by Alex Palmer 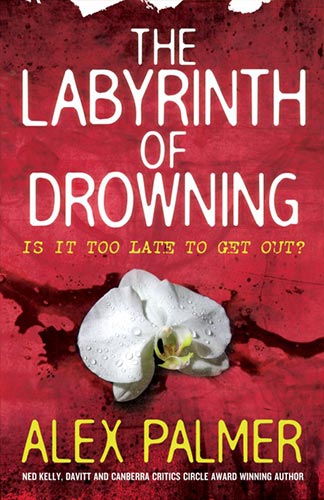 I hadn’t read either of Alex Palmer’s first two, award-winning novels. So when the opportunity came to review her third novel for the Sisters in Crime, I jumped at the chance to address this oversight.

It’s a challenge for an author to write in such a way that any book in a series can be picked up and appreciated by someone who hasn’t read the previous titles. For me, Palmer pulled this off: I got that Paul and Grace had history without needing to know the details, my only minor gripe being their young daughter’s age isn’t specified.

Palmer successfully sustains parallel narratives as Paul and Grace undertake overlapping investigations. The Labyrinth of Drowning is densely plotted and although I was able to follow the story, I had to read back over one or two key scenes to be reassured all the various plot threads had been resolved.

However, I never did figure out the significance of the title.

What I found most admirable about the novel is that Palmer allows Paul and Grace to have a functional relationship and a family life, neither of which are commonplace in police procedurals or detective novels. They make convincing good guys, balanced and disciplined, albeit tempered by fire: Grace is the survivor of a brutal attack and Paul the father of a son with a disability.

I found the bad guys less convincing, but likely as not this reflects my own bias, being more interested in the political than the pathological origins of violence.

That said, I particularly liked the scene where Paul sits in his study, reflecting on why he is drawn to the Black Paintings of Spanish painter Francisco Goya. ‘Their savage and bizarre satire spoke strongly to his experiences of dealing with the lunacy people inflicted daily on themselves and each other.’

I was reminded of my late grandfather, an ex-cop and former NSW Crown Prosecutor, who struggled when he turned defence lawyer because he ‘knew the bastards were guilty.’