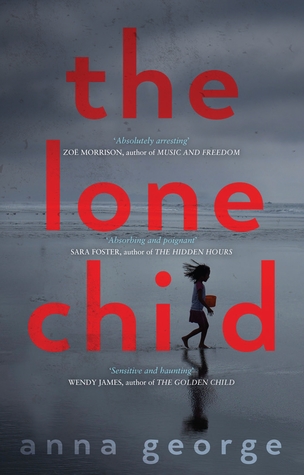 Neve Ayres has always been so careful. Since her mother’s death when Neve was seven, she’s learned to look after herself and to keep her cards close. But now her deliberately constructed world has collapsed: her partner’s left her when she was eight months pregnant. And so, alone with her newborn son, she’s retreated to her cliff-top holiday house in coastal Flinders.

There, another child comes into her life.

This is more a psychological thriller than a crime novel per se, and Anna George executes the psychological twists and turns beautifully. It is, at its heart, about motherhood, and it is refreshing to see motherhood receive such delicate, intimate attention on the page.

The majority of the novel alternates between the viewpoints of Neve, a struggling new mother who has moved to small-town Flinders to work out who she is in this new life, and Leah, a newly single mother with two little kids, struggling after her husband loses his job and moves to Queensland without them. From the start, we see that Neve is struggling with motherhood: there are the usual sleepless nights, but it is more than that. She is unable to bond with her baby because he looks too much like his father: her lover who left her when she was eight months pregnant to return to his wife. Her reality has completely changed, and she is not sure of the shape of it, or of herself, anymore. She hears and sees strange, out-of-place things, but neither she nor the reader is ever really sure whether there is a real threat to her, or whether it is her sleeplessness and ‘baby brain’ playing tricks.

Leah, on the other hand, doesn’t have the luxury of retreating to a big, comfortable seaside house. She’s been sleeping on her sister’s couch with her baby and her toddler who tends to run away, bringing the attention of the authorities to Leah’s family.

The contrast between Leah and Neve allows the novel to be an important reflection on class, privilege and prejudice. It allows Anna George to tease out the different judgements that still exist in an apparently classless society, particularly towards women and mothers. But the novel, for all its consideration of judgement, is itself remarkably un-judgemental. I found it to be a vindicating novel – for me, it vindicated my decision not to have children by showing with great honesty what a demanding change of life children are, but there were also some moments of beautiful tenderness that I believe could be vindicating for women who choose to have children, even though it’s hard: the moments that show why it’s all worth it. The novel seems to capture some of the complexity of the decision about having kids, and what this means for women. I loved this about the book.

Both Neve and Leah are beautifully drawn, and this is quintessentially a novel about women and their choices that become their responsibilities and then sometimes their traps. It is perhaps understandable then that the male characters in this novel were less complex than the women. Even the third narrator, Sal, a man grieving over the recent death of his mother, felt a bit lightly sketched. I understand the purpose of Sal’s perspective: it is through him that we see that Neve’s family has a history in the town and that there are secrets there, he becomes a potential love interest for Neve, and he is the one who begins to question the reality of what Neve sees: to show us Neve’s unreliability as a narrator. But I am not entirely sure he reached his potential as an independent, fully-formed character in the book.

However, it was the women in the book who were the stars, and who compelled me to read this novel in just a couple of days. Anna George is a master at writing uncertainty, to pull the rug from under her readers’ feet and make them doubt what they see, what they believe. And to make them question what they know.