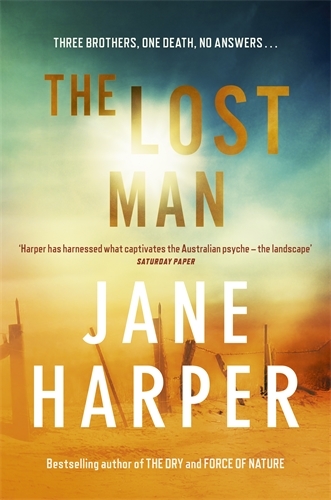 In The Lost Man Jane Harper surpasses her achievement in The Dry, her multi award-winning first novel. A broad range of Australian and international readers will find The Lost Man’s strong setting and mystery storyline engaging, not least grey nomads and backpacking travellers.

As in The Dry and her second novel, Force of Nature, Harper focuses on a cluster of characters in an inherently challenging natural environment. This story is set in south-west Queensland, where the treeless terrain is dry for 11 months of the year and flooded for the twelfth. Afternoon temperatures can reach 45 degrees. Out here, a person alone, unsheltered and without water, food and telecommunications cannot expect to live for more than a day or two.

Harper invokes the desolating nearness of the almost impassable Simpson Desert to the west, while stopping short of bringing desertification, climate change, and the future viability of arid-zone pastoralism into her plot. The book’s key death takes place in December, with the imminence of Christmas, that beacon for commercial storytellers, signalling the likelihood of an ending that comforts with at least some reconciliation and peace.

Not without reason, Australians perpetuate fears of loved ones losing their way or being stranded. It’s a tradition analysed by the late Peter Pierce in his The Country of Lost Children: An Australian Anxiety. With Indigenous tales not in her purview, Harper alludes to European Australians’ colonial and twentieth-century accounts of deaths in risky natural conditions. The high mortality rates for early settlers’ babies in outback Queensland are noted too. This environment is haunted. When the wind blows, spirals of dust rise like apparitions and the voices of lost children sound in the air like dingo howls.

New Zealand’s Man Alone tradition is also relevant.  The person who subsists far from society, suffering in their alienation, is a person courting suicide. The lone man’s travails may look like punishment in a deterministic universe; his musings may verge on nihilism and existentialism. Harper makes strenuous use of the words “empty” and “nothing”. Metaphorically this is telling, although on the literal level it jars in a time when we’ve learned from ecologists and first peoples that wildernesses are complex environments.

Harper gives her readers several lost men. In her cinematic Prologue, she introduces two men lost to the living a hundred-plus years apart. A lone headstone marks the burial place of a stockman whose name is now indecipherable; only the Biblical-pastoral words “who went astray” are still discernible low on the stone. Marks in the red dust form a circle surrounding the headstone, while on the bare ground at the base of the stone lies a body.

Desperate and increasingly deranged by dehydration, cattle farmer Cameron Bright has contorted within the tiny area of shade afforded by the headstone as the sun shifted, and within 24 hours he has died.  People familiar with this country can read the signs: they have seen collapsed livestock leave equivalent scrabbled marks. The cruel image might be called Kafkaesque except that the importance of societal determinants remains to be discovered. Initially it is inexplicable how and why a man of Cameron’s lifelong outback experience has come to die in such a way.

Nathan Bright, older brother of the popular and all-round capable Cameron, is alive yet has been lost to community and family for a decade. Living alone on a property that will never be profitable, he’s a self-sabotaging victim of divorce, depression, and ostracism by townspeople for a breach of the rule of looking out for others’ welfare. It is a tough and rarely forgiving regimen under which these people survive. Xander, Nathan’s high-schooler son, is lost to him for most of each year while he studies and socialises in Brisbane. And Bub Bright, younger brother of Cameron, is an under-rated and resentful man.

Inter-personal tensions are elaborated as Harper introduces the female characters living at the family homestead with its private burial ground. Freshly widowed Ilse, Cameron’s wife, shares responsibility for the operation of the main property, is mother to two observant young girls, and once had a brief relationship with Nathan. English backpacker Katy helps indoors while her partner labours outdoors. Liz, mother of the three Bright brothers, is the widow of patriarch Carl, who died by her side in a car accident 20-odd years ago. Nathan, Bub, and Liz share undiscussed memories of Carl’s damagingly domineering ways.

As a former finance journalist, Harper convincingly integrates property division, co-ownership, and inheritance issues. She shows how property, employment, and family ties,  along with domestic violence, can make captives of individuals across generations. Aaron Falk, the likeable financial-crimes investigator protagonist of the previous two novels, has no role in this narrative, although there is a link to the troubled families in the drought-affected badlands of The Dry.

With the novel’s action requiring long on-road and off-road journeys, The Lost Man has some characteristics of the road movie. Harper manages to keep these excursions interesting despite her characters’ usual laconicism. However, a sketch map would help prevent readers feeling disoriented. Ultimately characters congregate at the homestead for Cameron’s funeral and Christmas Day, with Harper delivering a culpability explanation that’s both sternly satisfying and appalling in the way of Greek tragedy.

This review appeared in Weekend Australian Review 27-28 October 2018 and is printed with the permission of The Australian.