The Lost Swimmer by Ann Turner 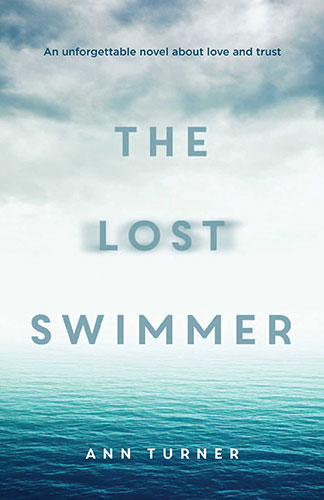 But suddenly, truth and certainty are turning against her. Rebecca is accused of serious fraud, and worse, she suspects – she knows– that her husband, Stephen, is having an affair.

Desperate to find answers, Rebecca leaves with Stephen for Greece, Italy and Paris, where she can uncover the conspiracy against her, and hopefully win Stephen back to her side, where he belongs. There’s too much at stake – her love, her family, her work.

But on the idyllic Amalfi Coast, Stephen disappears.

In a swirling daze of panic and fear, Rebecca is dealt with fresh allegations. And with time against her, she finds help in the most unlikely of places, and uncovers the secrets that stand between her and Stephen – and the deceit that has chased her halfway around the world.

Having just read “The Lost Swimmer” I was delighted to find that the author, Ann Turner, was a guest at a recent Sisters in Crime Melbourne event.

The night began with a lively discussion on the classification of the books under the spotlight as Malice Domestic mysteries. Ann Turner was joined by Ilsa Evans author of 12 books in a variety of genres, including three novels in the Nell Forrest Mystery series: Nefarious Doings (which was shortlisted in Sisters in Crime’s 2014 Davitt Awards), Ill-Gotten Gains and Forbidden Fruit (all published as ebooks with Momentum Press). The duo were interrogated by Jacqui Horwood, National Convenor of Sisters in Crime.

For those of you interested the Malice Domestic classification requires an amateur detective, characters who know each other, and no excessive gore, gratuitous or explicit sex. Was The Lost Swimmer one of these? Whilst I am not obsessed by classifications the issue was sealed when Ann informed the audience that she was influenced by Agatha Christy, liked the idea of unravelling a mystery and that day to day murders were too horrible. She also felt that fiction gives a level of protection from the crime.

Whilst we are on classifications I felt that The Lost Swimmer also inclined to an emotional thriller as it explores love and trust and will keep you wondering well after you’ve read the last page.
An archaeology professor, Rebecca Wilding, is that amateur detective. She is head of department at Coastal University where there are financial pressures, accusations of fraud with a growing suspicion that her husband Stephen is unfaithful.
A planned European holiday for Rebecca and Stephen takes the reader to Greece, Italy and Paris. Before she became a writer Anne was a screen writer and she confessed to find it a joy not to have to worry about budgets. In Greece we are introduced to two colleagues who add additional life to the story and assist Rebecca when Stephen disappears and she is accused with murder.

Rebecca is the narrator and at the Sisters event we were informed that thriller readers are primed to suspect the narrator to be unreliable when a book is written in the first person. Whilst this is evident in The Swimmer I felt it added extra suspense and mystery to the story.

This is an impressive debut novel. Whilst it took some time for the story and mystery to be established, once it did it moved with pace and the need to keep reading to find out the results. The descriptions of the landscape particularly the sea are wonderful. The road trip around Amalfi coast is riveting and I am sure we lead many readers to also take this and enjoy the ride.

Her next book is a mystery thrill set in the Antarctica with another strong female lead this time an Environmental Scientist.