The Luminaries by Eleanor Catton 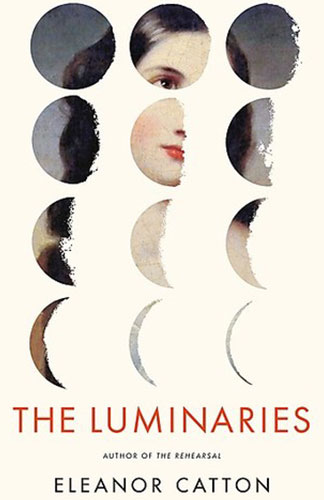 Author: Eleanor Catton
Publisher: Granta Publications
Copyright Year: 2013
ISBN: 9781847088765
Review By: Nita Jay
Book Synopsis:
Walter Moody, shaken by having seen a ghost in a storm at sea, enters the Victorian gold rush town of Hokitika. He happens upon a clandestine meeting of 12 men come together to explain strange happenings- deaths, disappearances-and in the end becomes a receptacle for the pieces of the puzzle they offer, and also a key player. In a novel sweeping the wild New Zealand coast, the gold mines, saloons, bars and prisons in Victorian style and paced according to interplanetary convergences, Catton seeks to resolve the mysteries and shows us what matters most, both to the planetary bodies as well as to ourselves.

The sense of other-worldiness, of interplanetary mysteries, of fates and wild seas, of fortunes to be made or broken, loves won or lost, are all presaged in the cover image of Catton’s Man Booker award winning Luminaries.

The front cover has images of a woman’s face revealed in stages like the phases of the moon, and the reverse cover, similarly, of a man’s.

And between these paperback covers are 832 pages of men and women playing out their fates in orbital determinations in a world newly formed: the 1866 gold-mining town of New Zealand’s Hokitika.

A British barrister, having seen a most horrendous sight in an ungodly storm at sea, steps off the boat into Hokitika rain and seeks refuge in a hotel, a hotel where he meets 12 men who have converged to solve strange happenings and possible crimes, to add up the facts, to put the planets in order, and to, in the end, draw him into the planetary puzzle. The attempted suicide of the town whore, the disappearance of a very wealthy man, the suspicious death of a gold miner are just a few of the immediate pieces of the puzzle to be put in place.

Catton’s masterly craft has been described as Dickensian in its colour, texture and characterization. The book has a golden glow about it, each chapter a spotlight on a moment in any character’s life.

The only problem I have with the book is its rhythm. One gets the sense that about half way through, Catton wanted to race toward the end. She fills us in with plot more than the how why and wherefore of characters’ motivations. In that, the plot becomes too confusing.

But even though you may ‘lose the plot’, you never lose the wild beauty of the New Zealand coast, the atmosphere of the New Zealand gold town and the passions of the luminaries who play out their destinies at the other end of the world.