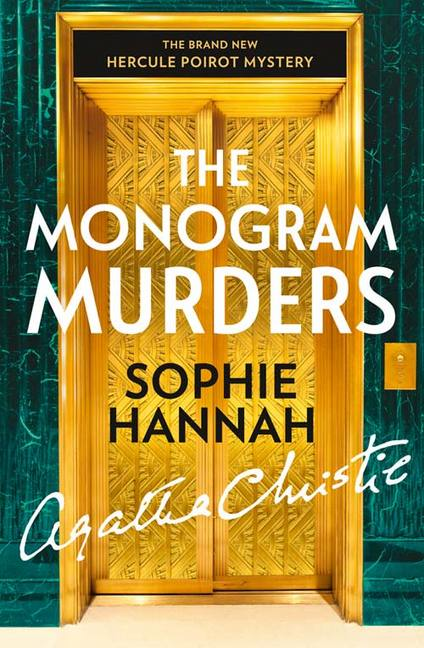 Hercule Poirot’s quiet supper in a London coffeehouse is interrupted when a young woman confides to him that she is about to be murdered.  She is terrified – but begs Poirot not to find and punish her killer. Once she is dead, she insists, justice will have been done.

Later that night, Poirot learns that three guests at a fashionable London Hotel have been murdered, and a cufflink has been placed in each one’s mouth. Could there be a connection with the frightened woman? While Poirot struggles to put together the bizarre pieces of the puzzle, the murderer prepares another hotel bedroom for a fourth victim…

English psychological thriller author Sophie Hannah was an entertaining guest interviewee at a Sisters In Crime Australia event in 2015. She talked about taking on the marvellous task of devising and writing new Hercule Poirot mysteries In the tradition of Agatha Christie’s originals. At that stage Hannah’s first Poirot novel, The Monogram Murders, had been published, with a co-ordinated international launch in 2014. Her second, Closed Casket, was subsequently published, in 2016.

So, what to make of Hannah’s initial effort, and by which criteria to assess it? Hannah has opted to write in the manner of Christie’s novels and therefore invites critique on that level. Where a contemporary architect might choose to attach a hard-edged aluminium pod to a 1920s bungalow to expand the accommodation, Hannah extends by carefully constructing a new room in the original style using quasi-original materials and respecting the limitations of the original building techniques. While there are obvious pros and cons to both approaches, I’d guess Hannah’s methodology is the one most Christie fans would expect and approve — if they approve of Agatha-extenders at all. For me, checking that every quirky tic of the original Poirot is present and correct is not of vital importance. Hannah gets her Poirot character sufficiently plausible-cum-implausible for me to go along as he takes his little grey cells on a fresh walk.

That a Christie-style mystery story is engagingly delivered in terms of pacing and structuring is more important to me as reader, and in this aspect of The Monogram Murders I was disappointed. Generally, Christie’s creations are concise, move along at an agreeable pace, and culminate in a compact, understandable resolution. As worldwide sales attest, they’re still eminently readable, filmable and playable, despite their dated and sometimes obnoxious morés. But Hannah’s novel is long (nearing 400 pages), repetitive, and slow-moving, her investigators so dependent on multiple conversations with informants that there is rarely a vivid sense of activity.

With minor characters prone to popping up again and again supplying bits and pieces of information, my initial impression was that Hannah was simply spinning out the story. However, as it emerged that some of these apparent clues were lies or red herrings, the mystery became increasingly convoluted. It’s not uncommon for Christie readers to relish plots hinging on intricate details (clocks, keys, signatures, railway timetables, suitcases, room service calls, means of poison administration, and so on). Hannah delivers strongly in this area. She is also generous in her use of familiar mystery tropes: disguises and escapes from locked rooms, for example.

Complicated and secret relationships from the past are influential, as they usually are in Christie plots. Murders which happen in London in the late 1920s have been motivated by passions and guilt-pangs fomented in an English village in 1913 and a university college even earlier. Class distinctions feature also, as is to be expected, although Hannah tones down conventional snobbery and accent differences. From the outset, her Poirot is on admiringly chatty terms with a coffee house waitress and genuinely concerned for the wellbeing of Jennie, the lady’s maid who has confided her life is in danger. And his reticent police colleague, Edward Catchpool, is not so reserved that he cannot learn from the variety of individuals with whom he’s obliged to speak. Racism is also held in check. Hotel employees may have ‘foreign’ names yet prove trustworthy and clearly spoken. Indeed, Rafal Bobak is conveniently able to recall lengthy excerpts of guests’ conversations verbatim. Religion is present in the form of its out-workings in an Anglican parish, with the more likeable characters taking a lenient interpretation of church doctrines and the unlikeable being vindictively censorious. Politics and international relations play no overt part in the storyline. With events happening in February 1929, the Great Depression has not yet set in, opulent hotels such as the Bloxham (‘like a palace of the belle époque’) are thriving, and folk such as Lord and Lady Wallace can maintain both a Belgravia town house and a country estate although good domestic help is hard to find. As for sex, nobody in Poirot’s vicinity in London seems to have a happy love-life, yet back in 1913 that village vicarage was quite the hotbed.

Had Hannah paired Poirot with a more interesting police officer, this novel might have had some of the exuberance and forthright humour I expected after hearing Hannah speak. Poirot’s cogitating and nit-picking could have been counter-balanced. However, faithful to the Christie model, Hannah has chosen to give Poirot an offsider every bit as quiet, scrupulous, literal minded and slow on the uptake as Captain Hastings, and she uses him as story-teller for most of the chapters. Catchpool narrates the progress of ‘the Jennie case’ in chronological order, with some chapters told in the third person because he was not present and has relied on Poirot’s testimony to reproduce what happened. Catchpool also incorporates a couple of long slabs of prose in which female informants explain what occurred in the past or more recently. As well, in the tradition of the Golden Age English detective novels, there are literary allusions. Catchpool, a crossword aficionado, recognises some verse on a gravestone as written in the sonnet form, and his informant insists he read the poem in its entirety and discuss its nuances.

The story’s momentum is further held back by Catchpool’s sensitivities. It’s possible to find Catchpool quite endearing and self-deprecatingly droll. However, Hannah chiefly employs Catchpool’s shortcomings as a means of bringing Poirot in on what should be a confidential Scotland Yard case. Although Catchpool is a detective he does not want to look at dead bodies because they remind him of a childhood trauma; thus he flees the Bloxham Hotel, scene of a triple murder, a few minutes after arriving, then must return the following day to resume his investigation, the second time around with the benefit of Poirot’s superior perceptiveness. Catchpool is also reluctant to go alone to the village from which two of the victims had travelled to London: ‘Poirot, you’ve got to come with me,’ I said rather desperately. ‘I’m out of my depth with this Bloxham business. I am relying on you.’  Once in the village Catchpool feels out of his element (‘if I have an element, that is’) and finds the hostile collective mentality hellish. He must visit one woman twice to elicit information and he fails to interview everybody he should. Later Catchpool must return to the village, this time in Poirot’s company.

All in all, The Monogram Murders could be described as a trial of modern-day readers’ patience. However, if you can put aside contemporary preferences for speed and transparency, and can let yourself relax into old-fashioned storytelling, you’ll find this novel a pleasant read. Hannah’s skills in weaving together intricately detailed plots motivated by recognisable human emotions are impressive. You’re not likely to guess fully and exactly who did what to whom until Poirot has teased out the final threads.