The Mystery of Agatha’s Disappearance

Thornell creates a fictionalised account of the mysterious ‘lost days’ in the life of the prolific and phenomenally successful detective fiction author Agatha Christie.

During 1926, at the time she was struggling with the writing of her novel The Mystery of the Blue Train, Christie suffered a pair of crises: the death of her beloved mother and the infidelity of her first husband, Archie. When Christie disappeared from her home and her car was found abandoned, there were fears for her safety and a nation-wide hunt was soon underway. After an 11-day disappearance, Christie was discovered staying in a Harrogate hotel under an assumed name. Ever since, Christie biographers, readers and assorted investigators and psychiatric experts have speculated about what was going on in Christie’s mind and emotions.

As part of her research, Thornell told her audience, she stayed at the same Harrogate hotel for 11 days. She chose a room as close as possible to the original one Christie had occupied and spent her time walking in the area and sampling the kinds of leisure activities that 1926 guests would have enjoyed. Thornell also spoke about Christie’s Australian connections and explained how she had introduced an Australian character into her version of Christie’s lost days. 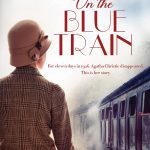