The Old School by PM Newton 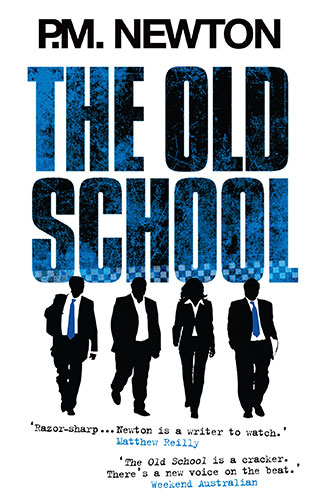 As I was reading this book I couldn’t help but create a checklist of the things that make up seriously good crime fiction for me, and apply it as I went.

A sense of place that puts you right on the spot, without turning into a travelogue.  Something that gives you a sense of the smell, the look, the way that people move around and interact with their location.  THE OLD SCHOOL is set in Bankstown, a suburb of Sydney almost tailor-made for the action that is taking place – multitudes of cultures living up close and personal, dodgy dealings in all walks of life, overcrowded streets, haves and have nots, development and profound poverty, traffic and dust.  Aboriginal activists are still fighting for land rights and against deaths in custody.  The Prime Minister’s famous Redfern Speech gets a mention.  There is such a strong sense of the place, and the timeframe in this book, that I’d swear you can smell the kebabs she describes.

A solid plot, a believable set of circumstances in which people find themselves pushed to the limit, achieving great things, dealing with other people, solving problems.  The events of the book – the discovery of two skeletons in the concrete foundations of a building being demolished and the death of an old homeless Aboriginal man are interwoven with the professional and personal life of Nhu ‘Ned” Kelly.  Ned is a young, mixed race woman, working her way towards promotion / change within the NSW police, at a time that ICAC (the Independent Commission Against Corruption) investigations are carefully dismantling the careers of many around her.  It’s a nice touch to weave the reality of the ICAC investigations, and mentions of some of its more notorious participants into the daily working life of Ned – adding not just a sense of realism, but giving readers a timeframe without having to stress dates.  Perhaps there are a few elements in the plot that rely a little too much on co-incidence but frankly the way that THE OLD SCHOOL lays that out – well coincidences do happen.

Good characters, including some growth, a bit of backstory, a realistic feeling of people who aren’t perfect, who make mistakes, who do good, and bad things.  What glues the elements of this book together are the characters that Newton has built.  Ned, her mentor and boss TC, her sister Linh and aunt MM, along with various other police and members of the Aboriginal community.  Whilst it’s undoubtedly Ned’s story, all the other players get their moments, and provide a great supporting role.  Newton also draws a very sensitive portrayal of being the child of a Vietnam vet in Australia, whilst slowly revealing the truth behind the death of Ned’s parents, many years ago.

Social observation – exploring real things from real life that aren’t right.  THE OLD SCHOOL does touch on a lot of issues – police and official corruption, organised crime, Aboriginal activism and land rights, fallout from the Vietnam war.  It uses all of these elements as aspects of the plot – there’s never any sense of lecturing or pushing a barrow.  Rather each element is revealed as part of the ongoing investigation, the lives of the characters, as aspects of the revelations leading to a solution.

Finally realism.  Not to the point of user manual accurate – but a real feeling that there are elements of the story, the setting, the events that are being presented that have a believability about them (not that I actually care if they are or aren’t 100% realistic or accurate – I just want to feel like the author knows what they are talking about).  THE OLD SCHOOL does this in spades.

According to the blurb on THE OLD SCHOOL, Newton worked in the NSW police force for thirteen years, and this is her first novel.  If this is a debut – bring on a whole lot more of the series please.