The Portrait of Molly Dean 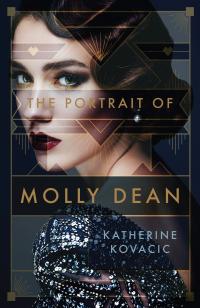 An unsolved murder comes to light after almost seventy years…

In 1999, art dealer Alex Clayton stumbles across a lost portrait of Molly Dean, an artist’s muse brutally slain in Melbourne in 1930. Alex buys the painting and sets out to uncover more details, but finds there are strange inconsistencies: Molly’s mother seemed unconcerned by her daughter’s violent death, the main suspect was never brought to trial despite compelling evidence, and vital records are missing. Alex enlists the help of her close friend, art conservator John Porter, and together they sift through the clues and deceptions that swirl around the last days of Molly Dean.

Katherine Kovacic’s fictional protagonist, Alex Clayton, must be street-smart and tough-minded to make a living as an art dealer in Melbourne in 1999. One of Alex’s strategies is to trawl auctioneers’ catalogues for “sleepers”, unrecognised and underappreciated works she can buy cheaply, clean, restore and reframe, authenticate, and turn over for a nice profit.

So, when Alex sets out to bid discreetly for a discoloured and dirty old painting of an unidentified sitter by an unidentified artist, she has her reasons. For starters, she recognises the brushwork as that of Colin Colahan, a painter who was active in the Meldrumite sub-culture of the Australian art scene in the 1920s and early 1930s. Also, she suspects the sitter, a lovely looking young woman, was Molly Dean, known to have been one of Colahan’s lovers before she was found murdered, culprit unknown.

On the night of the auction Alex contends with only one rival bidder, and as that person is bidding by phone she has no clue to their identity. Successful in buying at a moderate price, she has taken the painting home and is thinking about how to confirm her tentative identification of the sitter when she receives a phone call from the auctioneer. The losing bidder is “a tad … upset” and is offering an attractive sum to take the painting off Alex’s hands. Though tempted, Alex refuses, partly because she does not want to be bullied by an underbidder who is giving a patently false name and address, and partly because she has been hooked by the challenge of verifying this sitter’s identity and discovering more about her: “I want to see it through with Molly”.

Colahan and Dean were real people — indeed, non-fiction author Gideon Haigh has just brought out a history of the unsolved Dean case: A Scandal in Bohemia (Hamish Hamilton, 2018) — and Colahan did paint a couple of portraits of Dean, as Kovacic affirms in her Author’s Notes. Readers fascinated by circa 1930 Australian cultural and social history will find a lot to appeal to them in Kovacic’s fictionalised account of Molly Dean’s life and untimely death and what followed. Kovacic devotes roughly half her chapters to past-tense descriptions of Molly’s doings prior to her killing; additionally, parts of the modern-day chapters told in the first-person, present tense by Alex are given over to recreations of the 1930s police investigation supplied by Alex’s charming informant, an elderly woman whose father worked the Dean case.

The suspicious deficiencies of the police handling of the Dean case would seem to offer a novel in themselves, but that political and public affairs direction is one that Kovacic chooses not to take. Neither does she go for the improbable glamour that Kerry Greenwood invests in her amateur sleuth, Phryne Fisher. Rather, Kovacic remains in the more manageable and homely territory between, using a suitably direct prose style.

Molly Dean’s difficulties are chiefly personal, domestic and local: snide attitudes in the Colahan circle, the struggle to begin a writing career, a malicious mother at home, an odd stalker, and the fearfulness engendered by knowing other young women have been attacked and murdered in her neighbourhood near St Kilda. In 1999 Melbourne, Alex’s concerns are of a similar order as she goes about having the painting restored, investigating its backstory, and surviving the increasingly vicious yet still inexplicable efforts of the underbidder to snatch the artwork from her.

Like so many amateur sleuths, Alex lives alone and has few sources of support and protection. Hogarth, her extra-large hound, can be useful when he’s not being goofy, and John, her art conservator, is an understanding friend. Most matters are sorted by the end, leaving Alex and John relieved and Hogarth “bounding in the sunshine”, ready to feature in another art-related mystery.