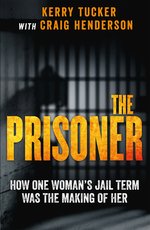 Kerry Tucker seemed to be a typical suburban mother of two, but she had a terrible secret: she had been stealing money from her employers.

When her offence was discovered it was reported to be the biggest white-collar crime committed by a female in Victoria, and she was sentenced to seven years in a maximum-security prison, alongside the state’s most notorious criminals. Being incarcerated with drug dealers and murderers, however, was not nearly as daunting as having to tell her two young daughters why she was leaving them. The shame was almost unbearable.

As Kerry adjusted to life behind bars, she began to see her fellow inmates as more than simply ‘murderers’ and ‘drug dealers’ – they became real people with names and broken dreams. And as they opened up to her, she realised that many of these women had violent home lives and were not getting parole simply because they couldn’t fill out the paperwork. Horrified, Kerry set about using her skills to represent them. She also began to study.

Today, Kerry has a PhD, advocates for women prisoners, and has been reunited with her daughters. In her inspiring memoir, filled with fascinating stories of life behind bars and shot through with wry humour, she reveals how one woman’s darkest hour can become a turning point in her life. And how, just perhaps, it can even be the making of her.

I heard Kerry Tucker speak about her time in prison on the radio and was intrigued.

The Prisoner is a fast-paced and factual account of Kerry’s four-and-a-half years in maximum security prison. The bluntness of her writing is intertwined with emotion.

The stories Kerry Tucker and Craig Henderson tell of the other inmates are sometimes funny and almost always gut-wrenching. They leave you with the hopelessness the women felt. Kerry’s story is one of hope and getting on with it by doing what she can to help everyone survive, not just in prison but in life.

I really enjoyed this book and recommend it wholeheartedly.