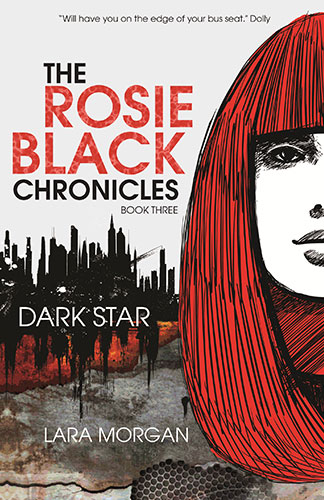 Author: Lara Morgan
Publisher: Walker Books Australia Pty Ltd
Copyright Year: 2010
ISBN: 978 1 921529 39 9
Review By: Virginia Jane Rose
Book Synopsis:
Five hundred years into the future, in the post-polar-melt city of Newperth divided along rigid class lines ruled by the security-fixated “Senate”, teenage Rosie Black who plans to be an interplanetary pilot finds herself caught between the evil machinations of a shadowy corporation and the dangerously attractive feral teenage boy, Pip, in a desperate race to bring the terrible secrets of the corporation’s laboratories on Mars back to Earth.

In the dangerous future world of Newperth while Centrals live in luxurious gated communities, Banks like Rosie and Ferals like Pip endure third world conditions – beggars and rubbish in the streets, frequent electric power outages in the grim tower housing blocks with concrete stairwells smelling of piss, and no help from neighbours when the bad guys burst in.

This is a very engaging and readable story about an extremely bleak world, though I would have liked more of those small, telling characterisations of passers-by and minor characters that do so much to enrich a story. Without them all the crowds of people in this dystopian future city seem like shadowy cut-outs instead of real fellow citizens for our heroes. This in turn makes the main characters seem disengaged from their world and misses an opportunity to further enrich the fabric and texture of the story.

This is a fat book, with pleasantly spaced type for easy reading, but it does take its time in taking off – by p. 167 although aiming for the Genesis settlement on Mars we are still on Earth, where the futuristic aspects of the story rest in recognisable developments in computing and communication technologies such as very effective holograms in place of human employees.

When Rosie and her aunt Essie, with the cryptic and controlling Riley and surprisingly civilised Feral teenage boy Pip escape their pursuers and head for Mars via the Space Islands by tourist shuttle, the imagined space world comes to life more vividly than future Earth.

The villains are a nebulous group with frightening powers and ruthless violence, who finally take clear shape when we get to the Mars colonies, and the splendidly imagined beauty of the Space Islands and the Red Planet help to make up for Rosie’s extremely bleak and humourless Earth world.

By halfway through the story the motive of the villains and the details of their evil plot are still unclear, but at last we get an insight, through a Mars insider, and discover that the baddies are trying to cover up their own malfeasance and deny responsibility at any cost.

Poor Rosie is in desperate straits, not knowing who to trust and in pursuit of a forlorn hope of rescuing her beloved family, but she is a very capable and brave girl, and now the plot thickens, upping reader suspense and engagement, and the very exciting, breathless high-risk flight and struggle of our heroes is gripping, and would film very well.

The astrophysics is also extremely convincing, and the world of space is believable, scary and exhilarating. The spare and direct writing style seems very influenced by television and film, which is great for action sequences but doesn’t work so well on the page to let us get inside the characters’ minds and feelings.

For me, the relationships between the characters are stated in such bald terms, they seem solipsistic, and don’t arouse as much pity and terror as they could – however the satisfying chase and rescue sequences will appease high school-age readers’ desires for vicarious adventure. With the help of some seriously good luck our heroes do succeed – up to the point where the cliff-hanger is set up for the second exciting book in this series.