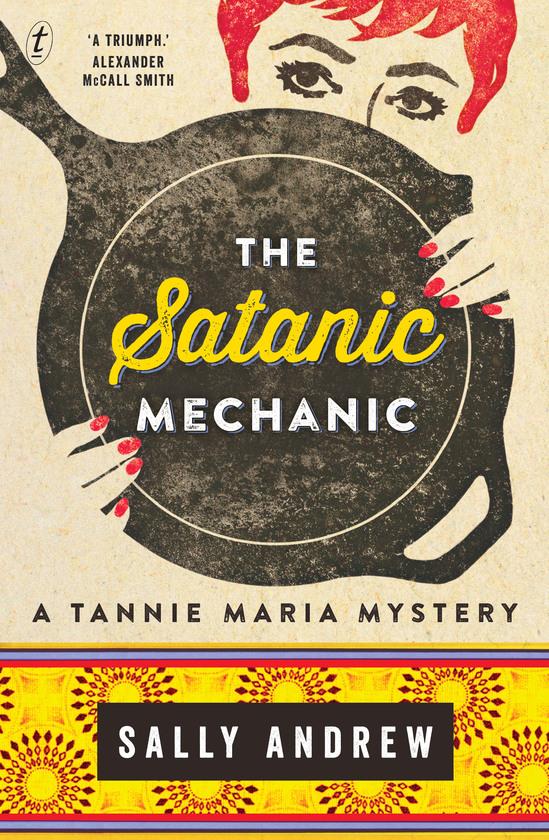 Tannie Maria writes the Love Advice and Recipe Column for the Klein Karoo Gazette: words of wisdom for the lovelorn, along with a recipe for something delicious that may help.

But Maria’s own problems resist her attempts to self-medicate, even with an amazing peanut-butter coffee chocolate cake. Her new relationship with Detective Henk Kannemeyer continues to be haunted by the memory of her abusive husband, and she decides to check out a PTSD counselling group run by a man they call the Satanic Mechanic.

But then someone is murdered—poisoned with mustard sauce—before her eyes, and Tannie Maria’s quest for healing takes a more investigative turn. Which means her intimate relationship with Henk is about to get professional. And more importantly, very complicated.

The Satanic Mechanic is the second Tannie Maria mystery following Recipes for Love and Murder, and also has a rich mixture of recipes, romance, and murder, brewed in a rural South African setting.

Sally Andrews, who lives in a mud-brick house on a nature reserve near Ladismith in the Klein Karoo, writes in a vigorous direct style which might also reflect her non-fiction and educational writing. She is clearly much concerned with nature conservation, and her evocation of the landscape and its bird and animal life are both acute and lyrical. This, together with her affectionate and vivid characterisations won my regard before crime was mooted.

The San (Bushmen) have won a major victory for land rights after centuries of unjust treatment. But the win in not popular, especially with corporate interests, and the main man, Slimkat, dies at a feast. Tannie Maria’s love interest, a cop, is called in to investigate but he does not want her involved.

For a great deal of the novel, the crime investigation takes place in the background while Tannie Maria cooks and eats a lot, answers the love-lorn in her newspaper column, and tries to cope with the terrors that paralyse her when she attempts intimacy with the very patient policeman. One of the wonders of the novel is that the reader is not given to know all at once – let alone be dragged through – the nature of the trauma that assails Maria, except that it has to do with the sexual abuse heaped on her by her ex-husband. Instead, we see the toll it takes upon her relationship and her body. After yet another failed attempt in bed, she screams out alone and loudly in a nightmare.

‘It’s lucky my neighbours are far away, or they might have come running to see if someone was being killed,’ she thinks. ‘When the sweating stopped, I was left with shame shaking through my body. My body remembered things that my mind tried to forget. I went to the bathroom and wiped my face with a wet cloth. And then I went to the kitchen, because the kitchen was my best friend….My fingers and head felt far from each other, but…I sat on the stoep and ate that warm orange pudding until my mouth and hands and belly came closer together; even Venus felt closer. Finally, I was whole again, and the shaking stopped.’ (p.29).

Eventually, she seeks help from a group of PTSD sufferers seeking deliverance from a series of traumas that are not our everyday fare: xenophobic killings of refugees in South Africa, gay men fleeing death in Somalia, men caught fighting on opposite sides of Apartheid, or tangled in the atrocities of wars in Angola. Domestic violence is ever-present together with the numbers of violent house invasions that take place in South African towns and cities. The effects of PTSD are well-researched and presented with unsentimental feeling. The cure – of facing up to what others have done and what the sufferers themselves have done in response – is tough, but necessary before self-forgiveness and healing can take place.

The two strands of the novel: food, healing, and romance, and the criminal investigation, meet quite late in the novel when a member of the healing group is killed. The solution of the murders is neatly done and involves a clever use of culinary skills to point to the killer’s identity. For me, though, there was less tension in finding the killer than in Tannie Maria’s struggle to overcome her trauma before she loses her lover.

See what you think of this wonderfully deft book and its recipes for some of the sweetest and most exotic African dishes you can imagine: sweets, mains, and snacks. Each recipe seems designed to make huge quantities so that, rather like the ingredients of the novel, readers may be satisfied and lack for nothing.