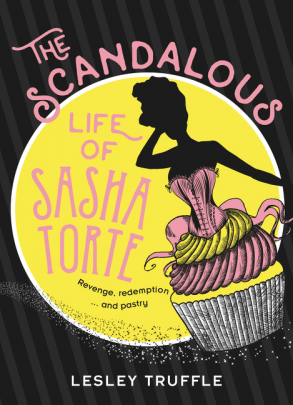 In the winter of 1912 on the wild West Coast of Tasmania, Wolfftown’s most notorious heiress and murderess, Sasha Torte, tells the tale of her own spectacular downfall.

Forsaken by her parents and raised by criminals and reprobates, Sasha becomes a world-famous pastry chef at the tender age of seventeen. Entanglement with the disreputable Dasher brothers leads to love, but also to a dangerous addiction.

Behind bars in Wolfftown’s gaol, Sasha sips premium champagne as she recalls a life of seduction, betrayal, ghosts, opium and an indiscreet quantity of confectionary – and plots her escape.

Who knew that truffles could be so rich? Anyone who has read previous work published by this writer, I should say, as she brings to life her repertoire of outlandish, sad, but always larger than life, characters and tells a story – or several at once – with all the verve, style, and dash of a buccaneer.

Set in a pioneer town on the west coast of Tasmania at around the turn of the last century this bravura tale maintains a rollicking pace as it details the life before prison on a murder charge of the irresistible redhead Sasha Torte, pastry chef extraordinaire. Sasha has not been blessed with an idyllic childhood or nurturing parents, although she has the love of a fierce and unconventional grandfather, as she battles through incipient disasters to emerge triumphant as the owner of the shop of exotic sweetmeats at the age of seventeen.

That in a sense is, however, the least of it. All around her are people drawn from melodrama, living and loving and wrecking their own or others’ lives in heroic and mock-heroic styles. There are the Dashers, there are the Woolffes of Woolfftown, and so many others. It is impossible to summarise. You’ll have to read it for yourselves to get the flavour of the place and people, and then you won’t be able to forget them for the sheer energy of their creation remains to hover about them. The Dasher brothers give her the greatest happiness and the greatest heartache, one giving her the precious gift of true intimacy, the other the threat of extinction. Not for nothing do I write in superlatives as relatives and schoolfriends and their lovers and spouses jostle for supremacy on the page. Sasha’s voice is a distinctive one and can always be heard above the rabble of those around her. She is an astounding character.

Not given in any way to moderation, Sasha declines ingloriously but with dash into drug addiction, which is truly observed in telling detail, as is her redemption by her hearty sailor lover, as she canters through the best of British society only to unravel on the continent. Her return to Tasmania, once cured, is marred by the death of one and accusation by another brother and an abundance of retaliatory attacks, murders, and mayhem, before we reach a resolution when one or other of the many shades of the dead return to comfort, make merry, and provide revelations of the many strands in this multi-layered novel. One word of warning: this action-packed memoir is so rich it is best not consumed in one sitting but savoured and nibbled over many days of fabulous reading to preserve its flavour without becoming overwhelming.