The Secret Fate of Mary Watson by Judy Johnson 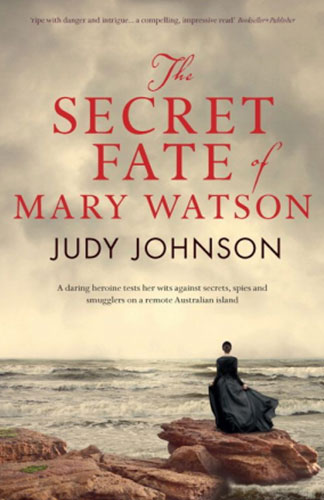 Author: Judy Johnson
Publisher: Harper Collins
Copyright Year: 2011
ISBN: 978 0 7322 9250 8
Review By: Jo Mcgahey
Book Synopsis:
A daring heroine tests her wits against secrets, spies and smugglers on a remote Australian island
′It′s peculiar, the assumptions we all make. For instance, how, in a diary, the truth bone′s connected to the hand bone … You shouldn′t believe everything you read.′
1879, Queensland. Fleeing her family home, 19-year-old Mary Oxnam has few prospects and no connections. Plain and penniless, she must rely on her audacious wit and fierce intelligence to survive.
Mary soon finds work as a pianist in a Cooktown brothel, a cover for more lucrative employment as a spy into smuggling operations. Within a year she has moved to Lizard Island, locked into a marriage of convenience. It′s a rough, isolated place, crawling with hidden enemies — and unexpected temptation.
Mary dreams of making enough money to live on her own terms, far from the murky world of espionage in which she has become embroiled. But as the plot of her secret employers nears fruition, the stakes climb ever higher and Mary′s life is in great danger. Can her daring and luck save her one last time?
Drawing on the little-known history of lawless Far North Queensland and based on the true story of a remarkable woman and her intriguing diary, THE SECRET FATE OF MARY WATSON is a thrilling tale of peril and intrigue, infused with a heady combination of beauty and foreboding.

The Secret Fate of Mary Watson is Judy Johnson’s second book and first work of fiction. At first I thought the story must be based on that of Eliza Fraser, after whom Fraser Island is named, but the writer firmly establishes Mary Watson’s bona fide, quoting documents held in the John Oxley Library in Brisbane. As the reader is swept along not knowing which incident is fact and which fiction, Johnson seems to have almost channelled Watson.
The reader at times struggles to suspend disbelief. It is almost impossible to accept that in far North Queensland, in 1879, this feisty, educated, young woman, not yet out of her teens, was able to find a job as a piano player in a brothel and at the same time engage in espionage and smuggling. But all these amazing things Mary does, drawing on what seems to be an inexhaustible inbuilt store of cunning, duplicity and forward thinking.
Regardless of her cleverness and her ‘whatever it takes’ attitude to managing her life, Mary is still totally, physically vulnerable, particularly in her marriage of convenience to Robert Watson and her later pregnancy. Her bravery is amazing as she deals with angry aboriginals on remote Lizard Island .She also inspires a fierce loyalty from the Chinese servant Ah Sam and, by now, also from the reader.
This book is a good fast read, with an amazingly contrived twist in the tail.