The Secrets of Wishtide – Kate Saunders 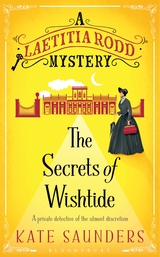 Mrs Laetitia Rodd is the impoverished widow of an Archdeacon, living modestly in Hampstead with her landlady Mrs Bentley. She is also a private detective of the utmost discretion. In winter 1850, her brother Frederick, a criminal barrister, introduces her to Sir James Calderstone, a wealthy and powerful industrialist who asks Mrs Rodd to investigate the background of an ‘unsuitable’ woman his son intends to marry – a match he is determined to prevent.

In the guise of governess, she travels to the family seat, Wishtide, deep in the frozen Lincolnshire countryside, where she soon discovers that the Calderstones have more to hide than most. As their secrets unfold, the case takes an unpleasant turn when a man is found dead outside a tavern. Mrs Rodd’s keen eyes and astute wits are taxed as never before in her search for the truth – which carries her from elite drawing rooms to London’s notorious inns and its steaming laundry houses.

Mrs. Laetitia (Letty) Rodd is a middle-aged widow whose beloved husband, Matt, died two years earlier. He had been an Archdeacon and, on his death, she had found herself in reduced circumstances. Thus she had come to live in a poorer part of town with her landlady, and now friend, Mrs. Bennett.

Letty’s brother Fred, is a barrister and employs her from time to time as a private investigator. As the book opens, Fred has a new case for her. Charles Calderstone , son of Sir James, is infatuated by a ‘totally unsuitable’ woman, Mrs. Helen Orme. Sir James wants her investigated and so Letty is sent to Lincolnshire to investigate, going ‘undercover’ as the family’s governess.

All is not quite as it seems in this wealthy society family. Sir James spends much of his time absent from the family. The lady of the house is isolated and has very little say, either in the running of the house, or in the education of her daughters and she has an insolent French maid, Therese.

Letty meets Mrs. Orme and finds her a pleasant and respectable woman who has no intention of allowing Charles to marry her.  And so Letty reports and returns to London. This is not the end of the matter, however. Sir James receives several blackmail letters, and Letty returns to Lincolnshire. Two murders follow, for one of which Charles Calderstone is arrested. Letty is convinced he is not guilty and, as she determines to prove it, she follows several intriguing family plots which eventually put her own life in danger.

There is, however, one aspect with which I struggled. A story needs to be true to its place and time.  It is 1850 and, while there are feminist rumblings in England and the first petition for women’s suffrage was presented in 1851, women were still the property of men. Their domain was domestic, no natter how clever they were. Therefore, it is difficult to accept that an inspector from the Metropolitan Police would allow himself to be ordered about by a woman who has instincts which ultimately turn out to be true but are not always backed by solid clues. Inspector Thomas Blackbeard is a man far ahead of his time.

That quibble aside, this is an enjoyable well-written yarn in the ‘cosy’ tradition. Characters are well drawn and the mystery interesting.  Letty is a likeable heroine whose future exploits it will be interesting to follow.