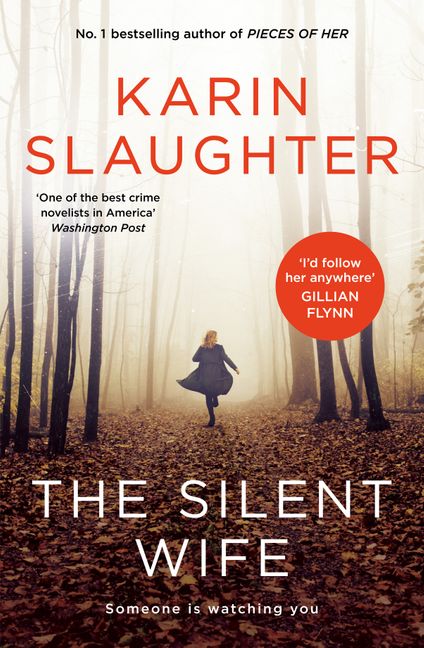 A woman runs alone in the woods. She convinces herself she has no reason to be afraid, but she’s wrong. A predator is stalking the women of Grant County. He lingers in the shadows, until the time is just right to snatch his victim.

A decade later, the case has been closed. The killer is behind bars. But then another young woman is brutally attacked and left for dead, and the MO is identical.

Although the original trail has gone cold – memories have faded, witnesses have disappeared – agent Will Trent and forensic pathologist Sara Linton must re-open the cold case. But the clock is ticking, and the killer is determined to find his perfect silent wife …

Reviewer: Anne Buist, author of the Natalie King series and The Long Shadow

This is a crime novel that is part of a long series (though I haven’t read them strictly in order and the actual crime stands alone, it’s the personal stories that move on)—I think of it in two halves, one when the protagonist Sara Linton is in the fictional Grant County married to the Police Chief Jeffrey Tolliver and the second half in Atlanta where she’s involved with Will Trent. This book manages to combine both halves!

Three women in Grant County are murdered/raped and Jeffrey Tolliver (hampered by rookie cop Lena Adams) track and think they get their man…move forward eight years and women are being raped/murdered with the same serial murderer signature. A con-woman stumbles on some extra women that might also fit the picture and Sara, along with Will and his partner Faith are drawn into sorting out what happened last time—and getting it right this time.

Warning: The crimes are gruesome and graphic. This is not for the faint hearted.

For those familiar with the series, there are pretty much all the familiar faces as we go back and forth in time. Back in Grant county eight years earlier we have Jeffrey and Sara post first divorce, tension with Lena Adams, and Sara’s family. In current time we have Sara, Will and Faith (and their boss Amanda), as well as Nick and Lena (briefly) and the coroner Dan Brock all from Grant County.

I always struggled with the idea of Sara being both a paediatrician and the pathologist as she was back in Grant County; in this its simpler, she’s just the pathologist. She’s a strong character with baggage—a rape she never told her first husband about, and conflict between her unresolved feelings for Jeffrey and those for Will. For the most part her being on the page drives the story and is where I as the reader wanted to be.

In this book I like Jeffrey a lot less than I’m pretty sure I did in previous books—probably a deliberate ploy so we like Will more. It doesn’t work for me as it just leaves me wondering what Sara saw/sees in either. Will is emotionally challenged and the angst around his and Sara’s relationship is drawn out and a bit tedious. Lean as always is a pain, but balanced by the strong no nonsense Faith and Amanda.

There’s an array of other characters as well—the women and their families, and other cops and coroners, and the con-woman who is well done/has a nice cameo. And the bad guy who is in prison and who may or may not have done the some of the murders. For the most part these characters are vivid and leave an impression.

Judging from a comment in the back by the author this was inspired by a real case of women being found in woods but I think only as a starting point. There’s a fair degree of anatomical knowledge mentioned which is done soundly.

This book is dense, nearly 500 pages—probably pushing 100,000 words (I had a real book not a kindle!)I’m not fond of vicious graphic attacks on women in books, but it is certainly engrossing. Slaughter (yes it is her real name) is an accomplished author and has many successes to her credit. I suspect my publisher would have wanted to shave 10.000 words off, but in times of Covid we need a book that isn’t over too quickly! Initially I found the going back and fro between past and present annoying, but I settled into it and the transition became very smooth. There’s a few moments of tension, and a few red herrings, but no major surprises or twists, more a solid police drama with a good dose of romance (which I could have done without as it was very angsty, but it did help with the ebbs and flows of the plot). For Slaughter fans, a winner. If you’ve never read any of the series, I’d start with one or two from the Grant County series with Jeffrey Tolliver and Sara before you do this one.