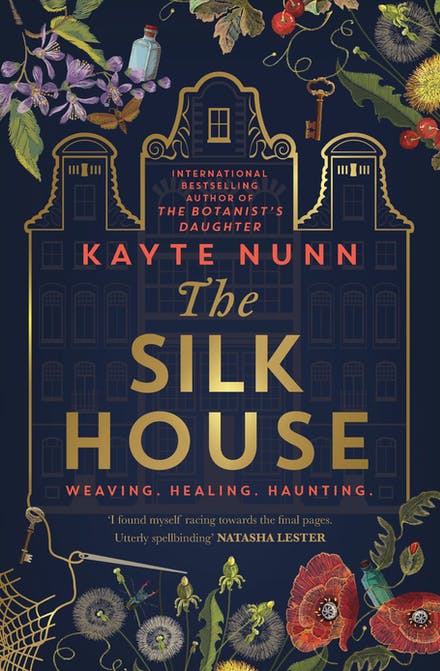 Australian history teacher Thea Rust arrives at an exclusive boarding school in the British countryside only to find that she is to look after the first intake of girls in its 150-year history. She is to stay with them in Silk House, a building with a long and troubled past.

In the late 1700s, Rowan Caswell leaves her village to work in the home of an English silk merchant. She is thrust into a new and dangerous world where her talent for herbs and healing soon attracts attention.

In London, Mary-Louise Stephenson lives amid the clatter of the weaving trade and dreams of becoming a silk designer, a job that is the domain of men. A length of fabric she weaves with a pattern of deadly flowers will have far-reaching consequences for all who dwell in the silk house.

Intoxicating, haunting and inspired by the author’s background, THE SILK HOUSE is an exceptional gothic mystery.

Kayte Nunn, has found an international readership for her novels including The Botanist’s Daughter and The Forgotten Letters of Esther Durrant. The Silk House is her sixth novel set in England in two time frames, the present day and during the silk trade in the 18th century. In this era men ruled the roost, and clever women ran the risk of being called a witch. The author was inspired by a house still standing in the English village where she lived as a child.

The modern values of the protagonist, Australian history teacher Thea, creates a denial that there is something spooky in the boarding school house in which she is living with fourteen female students for whom she is responsible. Can her modern reasoning fail in the face of the supernatural? Throwing a modern thinking ‘colonial’ female and her students into what had been an all-boys school for one hundred and fifty years provides several incidents between the ‘old school’ men and the women determined to be seen as their equals. All we women understand the implied insult or snub. The sports master is dismissive of this woman who plays hockey – little knowing she had been in the Australian squad. Battling modern day male censure amid the uneasy feeling she may be living in a haunted house are two elements which keep the story moving.

Giving ‘body’ to the creepy events in the house is the story of a maid who lived in the house in the 1760s whose mother taught her how to make herbal concoctions for various ills. I was impressed by the author’s knowledge of the plants and ‘potions’ made up by her character Rowan Caswell, knowledge once common before the age of commercial medicines. However, any female indulging in such pursuits was always at risk of being labelled a witch, and this adds further to the tensions in the story.

Modern readers will understand the frustration of the other historical character Mary-Louise Stephenson and her ambition to become a silk designer. How dare a woman think of such a thing! The character is based on one such woman who became successful by designing silk bestrewn with common flowers for milady’s gowns. The intensive research of the author is borne lightly as the reader absorbs the rich details of everyday life in the 1760s through these young women.

I have never been a fan of ghost stories until now. Being more of a history addict it was this aspect that drew me into the tale described as ‘intoxicating, unnerving and inspired.’

Researching the lives of the historical women who lived in the silk house, teases out the understanding of the 21st century teacher Thea to produce a surprising ending. The cover note calls The Silk House ‘an exceptional gothic mystery’, and I have to agree.

The Silk House gently pulled me into a tale of discovery of ye olde ways of life with the silk merchant, his wife and servants. Magically the mystery deepened making this a book which implored me to read on. (Or was it an unseen hand turning the pages?) Life, death and age-old customs entwine with a modern character trying to soothe souls unsettled for hundreds of years. I wanted to linger in this mystical world delaying my return to our sensible age of science and reason.