The Sixth Key by Adriana Koulias 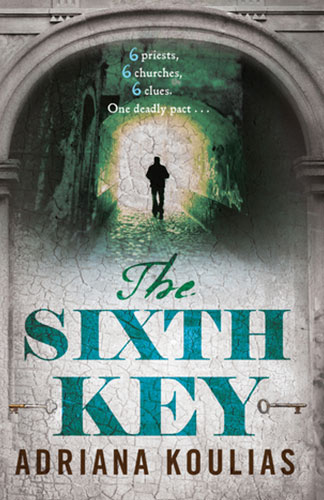 Author: Adriana Koulias
Publisher: Random House, Australia
Copyright Year: 2011
Review By: Sandra Nicholson
Book Synopsis:
‘By the Power of these Keys the Head of the Church will be made the Lord of Hell’
In late 2012 a cryptic invitation leads a crime novelist to Venice’s Island of the Dead. Once there he is captivated by the host’s tale, which spans the centuries – but seemingly begins and ends in the dark days of the 1930’s…
In 1936, a similarly cryptic invitation brings Grail historian Otto Rhan to an apartment in Berlin. Waiting for him inside is Hitler’s right-hand man, Heinrich Himmler, and Hahn’s life is turned upside down.
For Himmler wants Rahn to locate Le Serpent Rouge, a notorious book of black magic written by Pope Honorius in the 14th century.
Following a trail from Paris down to Carcassonne in the South of France, Rahn discovers a web of deceit and murder. Clearly Himmler is not the only powerful figure in search of the grimoire. A shadowy circle of men are watching Rahn’s every move, and they will stop at nothing to possess both the book and the legendary Sixth Key that will unlock its terrifying power…

The book opens with a mystery when an author travels to San Michele, the Island of the Dead, in Venice to meet the Writer of Letters, who lives in a monastery on San Michele. The Writer of Letters has suggested the meeting to solve a riddle relating to the author’s latest work.
The Writer of Letters speaks about the choices people make at the ‘fork in the road’ and how different history would be if other choices were made. He uses Otto Rahn, an archaeologist, seeker of the Holy Grail and (perhaps) inspiration for Steven Spielberg’s movie Indiana Jones, and Rahn’s meeting with Henrich Himmler to illustrate his point. The book then moves onto the life of Otto Rahn in Hitler’s Germany, his ‘accidental’ joining of the SS and a task that Himmler sets him to find Le Serpent Rouge, which Himmler wants to give Hitler for his birthday. This task takes Otto and friends (and others) on an Indiana Jones type adventure to the south of France. This sounds very exciting but it is at times violent and dark.
The book tells three stories alongside each other. Firstly, the book commences with the story of the author and the interaction with the Writer of Letters. This interaction needs patience as they do speak in riddles most of the time and there is a bit of ‘one-upmanship’ happening between these characters. The second story follows the many twists and turns, myths and legends around the Cathars’ treasure (was it the Sixth Key/the Holy Grail/the lineage) and the third story details Otto Rahn’s search for Le Serpent Rouge, although of course it is not that straightforward. Although they are separate stories they do intertwine and are reliant on each other. It is also a book in which all the clues along the way have meaning in the story but some are not realised until the last chapter.
I knew when I commenced this book that it was based on an actual person and after reading just a few pages I wanted to know more about Otto Rahn so off to ‘Google’ I went. I found his story fascinating. At a time when everyone from Hitler down had to prove their Aryan bloodline, they overlooked Rahn’s Jewish ancestry and his homosexuality initially and it only became an issue when he didn’t deliver what was requested of him. The book certainly gives the reader an insight into yet another aspect of Hitler’s and Himmler’s Nazi Germany and the victims it created.
Adriana herself states that this story is ‘very complicated’ and I would have to agree with her. It is also a very dark book in places. It is not the book to read is you are reading for escapism or for those who like their crime ‘cosy, because it is a book that requires concentration. However, it had me hooked from the first page. It is well researched and had me wanting to read more of Adriana’s work. Fortunately for me her name rang a bell, so I went to my stack of books bought but still to be read and found one of her previous books, The Seal, so that has gone to the top of the pile.