The Skeleton Road by Val McDermid 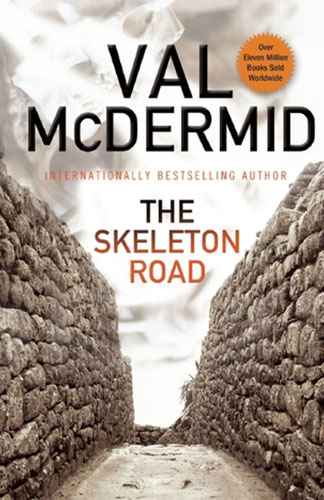 Author: Val McDermid
Publisher: Little Brown
Copyright Year: 2014
ISBN: 978-1-4087-0458-5
Review By: Angela Savage and Sue Turnbull
Book Synopsis:
The Skeleton Road opens with a skeleton being found in the top of an abandoned Gothic building in Edinburgh, a bullet hole in its skull. The corpse carries no ID, only a hotel keycard in its decaying pocket.

Because it is a skeleton, the case comes under the responsibility of Detective Chief Inspector Karen Pirie of the Historic Cases Unit, who works with the wonderfully named Dr River Wilde, a forensic anthropologist, to try and identify the body.

Elsewhere, Professor Maggie Blake, an expert in geopolitics at Oxford University, is reluctantly celebrating her fiftieth birthday, still mourning the disappearance, eight years earlier of her lover, Dimitar Petrovic, aka Mitja, a Croatian army general and later special adviser to NATO forces. Maggie and Mitja lived through the siege of Dubrovnik in the early 1990s and were living together the UK at the time of his disappearance.

Meanwhile, war criminals in hiding are being assassinated before the International Criminal Tribunal for the Former Yugoslavia (ICTFY) can bring them to justice. The new boss at ICTFY, wants whoever’s behind the summary executions brought to justice and pressgangs two underperforming staffers Macanespie and Proctor into an investigation. Maggie’s friend, Tessa Minogue, a Human Rights lawyer involved with the ICTFY, thinks Mitja is responsible for the assassinations, which began shortly after he disappeared. But could the man Maggie loved have left her to become a vigilante?

The Skeleton Road, the latest standalone novel from Scottish crime writer Val McDermid, combines compelling characters and a cracking pace with an intriguing story that both entertains and enlightens.

McDermid acknowledges the inspiration of two women behind this story, one of whom, Dr Kathy Wilkes, like the character of Professor Maggie Blake, ran clandestine philosophy courses behind the Iron Curtain and was caught up in the siege of Dubrovnik; the other, Professor Sue Black, a leading forensic anthropologist, was deployed to Kosovo to investigate atrocities in the wake of the Croatian War. That McDermid has taken the experiences of these two friends and transformed them into a genuinely thrilling read is a measure of her crime writerly brilliance.

The plot unfolds through multiple points of view, the minor characters as skillfully drawn as those whose voices narrate the main plot strands, DCI Karen Pirie, Prof Maggie Blake and bored ICTFY bureaucrat Macanespie. The timeframe moves from the present back to 1990s Dubrovnik via the notes Maggie decides to write down, ‘to revisit her history and perhaps find a different angle, a new truth.’

Maggie is poignantly drawn as an academic who has loved and lost, the stiff upper lip she displays in public masking her private hurt. DCI Karen Pirie, who first appeared in 2008’s A Darker Domain, makes a welcome comeback, a character in the tradition of Miss Marple, who is sharper than she first appears and all the more effective for being underestimated. Macanespie is likewise believable as the bureaucrat motivated as much by self-preservation as by justice.

McDermid’s willingness to put her characters in peril and her refusal to flinch in the face of their pain, heightens the suspense.

At the same time, I learned a great deal more about the war in the Balkans than I knew before reading The Skeleton Road. And for me, there’s nothing more satisfying than a crime read that teaches me something about the world while taking me on a wild ride.

How justice is served, and the difference between vengeance and justice, are among the themes underpinning Skeleton Road. When I asked McDermid at a recent Sisters in Crime event in Melbourne about the tendency for her characters to resort to vigilantism and rough justice, she argued that her novels leave readers with a sense of justice having been done, which is often missing from real life.

Whether the ending of Skeleton Road leaves you satisfied or wanting may well depend on your own definition of justice. But I guarantee you’ll enjoy getting there.

At its heart, Val McDermid’s eighth stand-alone thriller, The Skeleton Road, is about the politics of place. As Professor Maggie Blake informs an attentive audience during a lecture at St Scholastica College, geopolitics involves thinking about the ways in which the language people use to frame conflict over space helps to bring about the reality it describes.

Challenged by one of her students to apply this reasoning to the Balkan conflicts of the 1990s, Prof Blake wins the argument hands-down because she was ‘there’. This revelation introduces the back-story of Maggie’s own experiences during the siege of Dubrovnik. The personal is extremely political.

Professor Blake is not the only character to demand our attention. Indeed, the strength of this crime novel lies in the sheer range of characters we encounter, some of them briefly. Amongst these is a demolition quantity surveyor with an endearing fear of heights who discovers a skeleton hidden inside a Victorian pinnacle high on the roof of a derelict school building in Edinburgh.

This is the death that brings on to the scene of crime the comfortably built Detective Inspector Karen Pirie of the Historical Cases Unit and her young, not so bright, apprentice, Detective Constable Jason ‘The Mint’ Murray. Karen is well aware of the Mint’s limitations but manages to work within them without making it obvious. There’s a kindness that pays off beautifully and poignantly at the end.

Faced with the prospect of examining the body in the pinnacle, Karen is less than impressed. ‘You’re joking me, right?’ she protests. ‘They’re not seriously expecting me to go foutering around on the roof of a building that’s technically condemned?’ Note McDermid’s frequent use of the Scottish demotic is a delight and well worth an aside with an etymological dictionary. To fouter turns out to be a very useful verb.

Then there’s the Scottish lawyer Alan Macanaspie, mournfully rejected by his long-term girlfriend as a result of his increasing physical unloveliness. Alan has been seconded to the International Criminal Tribunal for the former Yugoslavia where his challenges include in a ‘miserable Welsh git’ of a partner, Proctor and an ambitious new black boss from working class Acton. The geopolitics of race and class are rife in this workplace too.

Much to Macanaspie’s embarassment, in every instance where he and Proctor have put together a case against a war criminal, the target of their operation has been murdered before they could be arrested. Cagney is not impressed and their jobs are on the line unless they can locate the vigilante avenger.

This is the elaborate set up for a narrative that trips neatly between past and present events in Oxford, Edinburgh and the Balkans before a neat bookending move. The final countdown occurs on yet another rooftop, that of the Radcliffe Camera, a circular building affording a panoramic view of the Oxford skyline.

This is the place, McDermid lets her readers know, where Lord Peter Wimsey and Harriet Vane enjoyed a ‘crucial conversation’ at the end of Gaudy Night, a crime novel constituting Dorothy L. Sayers own ‘love letter to Oxford’. The view from the top, it would appear, hasn’t changed that much.

In its exploration of the relationship between people and place and the problems that ensue, The Skeleton Road might well be Val McDermid’s love letter to Oxford, to Edinburgh and to crime fiction too. One of her best.

Thanks to The Age and the Sydney Morning Herald where this review was first published.