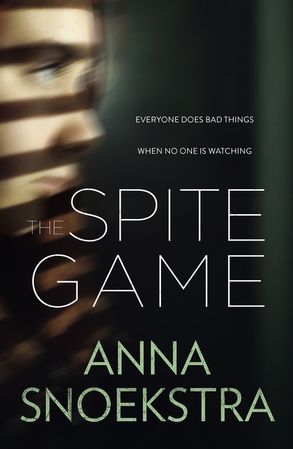 Getting even is a long game…

Mercilessly bullied in high school, Ava knows she needs to put the past behind her and move on, but she can’t – not until she’s exacted precise, catastrophic revenge on the people who hurt her the most.

First, she watches Saanvi. Flawlessly chic and working hard at a top architectural firm, Saanvi has it all together on the surface. But everyone does bad things when they think no one is watching and Ava only wants what’s fair – to destroy Saanvi’s life the way her own was destroyed.

Finally, Ava watches Mel. Mel was always the ringleader and if anyone has to pay, it’s her. But one tiny slipup and Ava realises the truth: Mel knows she’s being watched, and she’s ready to play Ava’s games to the bitter end.

‘Did you know that chickens are cannibals? If a chicken has a scratch on it, even a small one, you have to separate it from the others. They can smell blood.’

In Anna Snoekstra’s The Spite Game, we first meet Ava in the school locker room. ‘Cool girls’ Saanvi, Cass and Mel trap a fat girl in the shower. Ava watches the three girls hurl lumps of greasy Chiko Roll at the cowering, naked Miranda. They smell blood. Ava is caught watching but promises not to tell and in that second her world changes.

We next find Ava at the police station. She reflects on her life and the reason she is about to make an astonishing confession. She was a timid girl in high school, and desperate to win the cool girl’s approval, Ava finally believed she was accepted into the group. But merciless bullying and an act of gut-wrenching betrayal tattoos unbearable anguish into Ava’s soul.

But unlike most, Ava can’t move on. She obsesses about revenge and systematically sets out to destroy each one of her childhood tormentors. Saanvi, Cass and Mel all have secrets – and when the time is right Ava will use the knowledge of those secrets to devastating consequences. But Mel, the smart ringleader of the clique, is onto Ava. Mel hasn’t changed and is happy to engage in a deadly game.

The narrator, Ava, swaps between past and present. In Ava, Snoekstra has created a compelling character, capturing with precision a girl’s sense of hurt, humiliation and confusion and the emotional scars carried into adulthood. Anyone who has experienced bullying or being the butt of a joke will relive Ava’s excruciating pain. Even when Ava is carrying out her revenge, Snoekstra captures the young woman’s vulnerability. Ava wants to be good but can’t. There are also moments of tenderness between Ava and her sister Bea, and Evan, the man Ava attempts to push away because he doesn’t deserve a psychopathic entanglement.

And don’t we all just love to hate the cruelty and shallowness of bully girls. Although it is hinted Cass, now a psychologist, has changed, she’s not to be spared Ava’s revenge.

The Spite Game is set in the outer suburbs of Melbourne, the setting vivid and delightfully detailed – the hollowness of an unfinished housing estate somehow reflecting Ava’s incomplete life.

My take. Please read The Spite Game. Fans of revenge tales, like me, will enjoy seeing the punishment fit the crime. I’m a fan of Snoekstra’s writing, she creates nuanced characters, gripping plots and an exquisite sense of place – all captured in The Spite Game. I found myself, after finishing the novel, not only cheering Ava on but also wondering if it was normal to feel such satisfaction and just how high was my ranking is on the psychopathy scale.