The Stone Boy by Sophie Loubiere 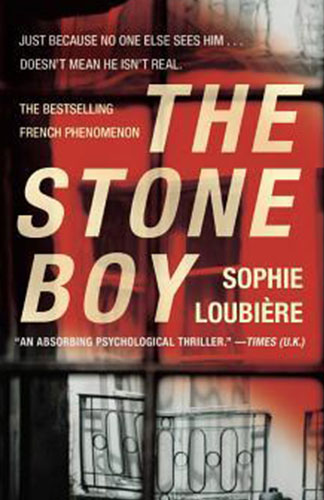 Author: Sophie Loubiere
Publisher: Trap Door
Copyright Year: 2013
Review By: Sandra Nicholson
Book Synopsis:
When the elderly Madame Préau returns to her own house after several years spent in a convalescent home, she immediately notices that the neighbourhood had changed. A new family has moved in next door and from her window she watches their three children playing in the garden after school.

Two of the children seem perfectly healthy, but Madame Préau is struck by the third child, who seems listless and stands apart from the others. When she reports this to social services, they refuse to believe her. Cut off some years ago from her own grandson, she begins a mission to help this boy, even when those around her start to fear for her sanity.

Reading this novel is like examining an impressionist painting. You stand back and see an integrated scene, with blended hues and then as you move closer to the paining it deconstructs and becomes a series of small individual colour strokes that look nothing like the final scene. As you commence this novel, it appears that everything is logical and predictable. However, as you move through the novel, you begin to see the separate parts and it changes your whole perspective. The twists and turns add both interest and emotion.

Gérard Préau is a doctor and Elsa, a headmistress. They are cousins, had grown up together and eventually married and had a son, Martin. Gérard’s career wasdemanding so Elsa gave up her career to focus on the family. However, when Gérard intends to travel to Canada to further his career, Elsa requests that he does not return this time and that she will explain the separation to their son. She again becomes a well-respected headmistress of the Blaise Pascal School. Martin does not have an easy life with his mother. However, he follows in his father’s footsteps and becomes a doctor, marries Audrette and they have a son, Bastien. As you see the behaviour of Martin, the doctor, you wonder if this was also his father’s behaviour and the reason for Elsa leaving the marriage.

Elsa has been in a ‘home’ for a number of years and her son has finally brought her back to her own home, where he can keep an eye on her. Martin’s wife wants nothing to do with Elsa due to her involvement in her grandson’s death, so Elsa’s life becomes her home and visits from Martin. She is not interested in making friends. However, more and more she sits by a window and watches the children next-door play. She notices that one of the children, a boy of her grandson’s age, plays alone, appears malnourished and dishevelled and is badly treated by his parents. She then sets about to involve the authorities but no one will believe her and indicate to her that they believe that they are the imaginings of an old woman. However, she brings it to a head by putting sleeping tablets into a cake that she bakes for the family of this neglected child, intending to rescue him when they are all asleep. Her plan does not go well and the children’s father assaults her when he realises what she has done. The police become involved and the family move away to an unknown destination. However, due to the faith of one person, Elsa is vindicated.

To say too much more would spoil it for the reader. It is a story that reveals itself in greater depth with every page. All is not as it first appears. I have to admit that I had not read this author previously and when I commenced reading I thought, ‘Oh, I know where this is going’, but that is not what happened. The further I read, the faster I read, as I couldn’t bear not knowing what was going to happen next. A great read.