The Tall Man: Death and Life on Palm Island by Chloe Hooper 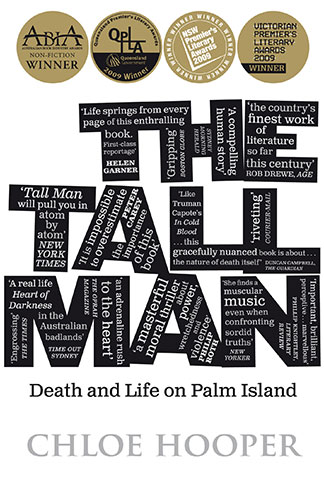 Book Synopsis:
This is a multi award winning book, and justifiably so. Besides taking out our own Davitt for True Crime it has chalked up the 2009 Premier’s Literary Awards of NSW, Victoria and Queensland, plus the 2009 Australian Book Industry Award for General Non-fiction, the 2009 Indie Book of the Year Award – Non-fiction, the 2009 John Button Prize and 2009 Ned Kelly Award – Non-fiction. The jacket informs us the book is about ‘Death and Life on Palm Island’ and that sums it up. Not only does it cover the death in custody of aborigine Cameron Doomadgee and the resulting inquest and trial, but also life as it exists in the communities of North Queensland. Chloe Hooper explores the way people live and the conditions under which they exist. We can recall the story that filled the media for months, but she explores the lives of the people concerned, both living and dead, and uncovers their humanity. The story telling is restrained, not judgmental, and the characters spring into life in the telling. This is investigative journalism at its very best – a must read for all concerned Australians.