The Trauma Cleaner by Sarah Krasnostein 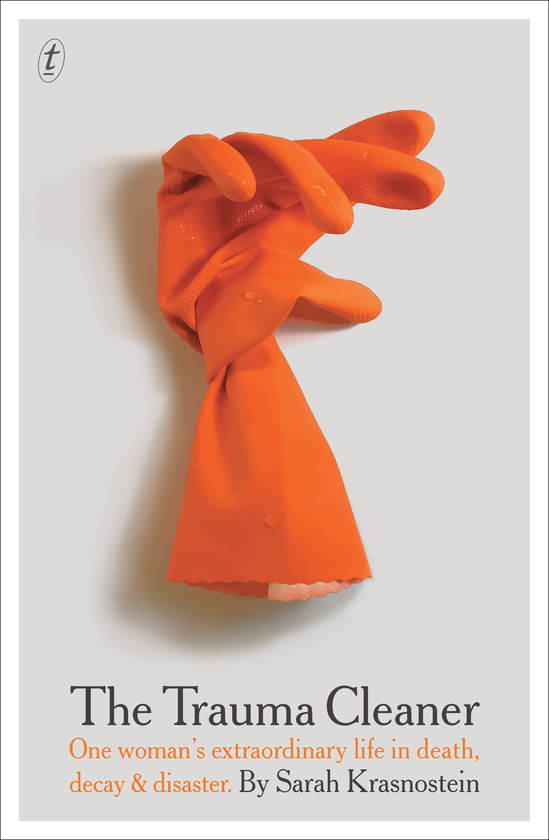 But as a little boy, raised in violence and excluded from the family home, she just wanted to belong. Now she believes her clients deserve no less.

A woman who sleeps among garbage she has not put out for forty years. A man who bled quietly to death in his lounge room. A woman who lives with rats, random debris and terrified delusion. The still life of a home vacated by accidental overdose.

Sarah Krasnostein has watched the extraordinary Sandra Pankhurst bring order and care to these, the living and the dead—and the book she has written is equally extraordinary. Not just the compelling story of a fascinating life among lives of desperation, but an affirmation that, as isolated as we may feel, we are all in this together.

Sandra Pankhurst is the kind of person nobody wants to meet professionally. She cleans up homes where crime has left its bloody, and often putrefying stains. Or after suicide. Or when death has been the natural end to someone’s life. Or when the living have hoarded to the point their home has become unhealthy, sometimes dangerous.

Sarah Krasnostein wrote Sandra’s story. Sarah is a legal academic who specialises in criminal law. She is also an author. For four years she followed Sandra to crime scenes, hoarder’s homes and other unimaginable places. How did she cope? How did she write a story that was as gritty and horrifying as it was beautiful?

Sarah’s own words, in the first chapter of the book, reveal something of how The Trauma Cleaner became much more than a dispassionate story: And so your story is imperfect, Sandra, but it is here, made complete, and it is my love letter to you.

The Trauma Cleaner is not the easiest book to spend time with yet it is one of the most beautifully told stories I have ever read. It’s true that Sarah’s retelling of some of the homes she visited, and the conditions in which people lived and died, made my tummy a little queasy. To a crime writer like me the details were fascinating. I’ve always wanted to know what it was like to walk into a scene where someone had been dead for weeks. What did they have to wear? What did they really see? Now I know.

Yet the most powerful elements that are woven into this story are the chronicles of Sandra’s early years. I was appalled to learn about her childhood: adopted as a baby boy, then when his parents learned they could reproduce their own offspring, rejected. Locked, every night for years, in a shed in the back yard. Beaten for the smallest of slights. Damaged beyond measure. It is revealing that Sandra has little memory of her childhood; she has blocked the trauma to a point where it is inaccessible, even to herself.

There is enough detail about entering crime scenes and the process of restoring the homes to something approaching normal in The Trauma Cleaner to satisfy the curiosity of those of us who ask: what’s it really like. The underlying theme of Sandra’s work is bringing order to chaos: a powerful metaphor for the twists and turns in Sandra’s life.

One of the things that struck me the hardest about The Trauma Cleaner was after I closed the book. I wondered, for days, at the way Sarah Krasnostein had chosen to tell Sandra’s story. Sarah’s style is narrative and she often pauses, during the telling of the story, to examine her own reactions and to reflect to the reader on her own observations. There were times Sarah’s thoughts made me stop and ask myself: What do I think about that? There were times I disagreed with her. And there were times I was blown away by her sensitivity. Or her brutal honesty.

I was privileged to meet Sandra Pankhurst after I read The Trauma Cleaner. I spent an afternoon with her in the home of a friend. The woman I met was elegant, straight-talking, honest and surprisingly funny. The scars of her previous life were there when I looked hard, and I confess there were moments that I did. Perhaps the most revealing thing for me was that because of The Trauma Cleaner I felt I already knew Sandra in a strange kind of way.

And perhaps the most important point: Sandra Pankhurst is exactly who Sarah Krasnostein said she is. And that means Sarah captured her spirit, her character, her vulnerabilities and told her story in a way I found remarkable.

How many stars would I give The Trauma Cleaner? Maybe a million, were that even possible.