The Truth About Verity Sparks by Susan Green 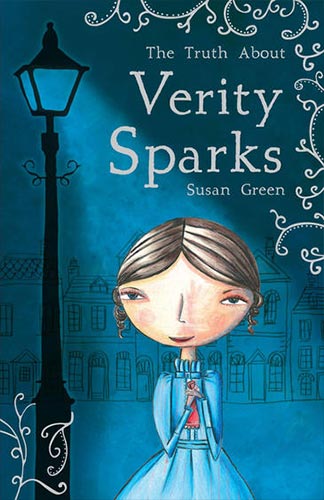 London 1878. Verity Sparks has an extraordinary talent: she can find lost things just by thinking about them.

When she joins a Confidential Inquiry Agency, she discovers there is a mystery lurking in her own past and that unknown forces are working against her. It soon becomes clear that Verity and her friends are in great danger.

Who doesn’t want them to learn the truth about Verity Sparks?”

Who indeed? There are a nice lot of red herrings in this little mystery, even if the only mystery involved is Verity’s identity. There are also plenty of delightfully quirky characters in the family of Saddington Plush aka SP, his sister Judith, his father the Professor, who spends his life doing experiments, his botanical artist aunt Mrs Morcom, who keeps a couple of pythons, Antony and Cleopatra, in the conservatory. They investigate their cases with many a stop for tea.

I liked the references to Victorian spiritualism – this era was a major time for seances. I also liked that when a character is hit on the head and knocked unconscious, he doesn’t recover immediately, as characters do on TV or in much fiction, including a massive best selling novel I’m reading now. It won’t do young readers any harm to learn this.

I’d recommend this book for anyone who enjoys the novels of Sophie Masson. It has a style very reminiscent of Ms Masson’s work.

This book is on the 2012 Children’s Book Council of Australia shortlist.