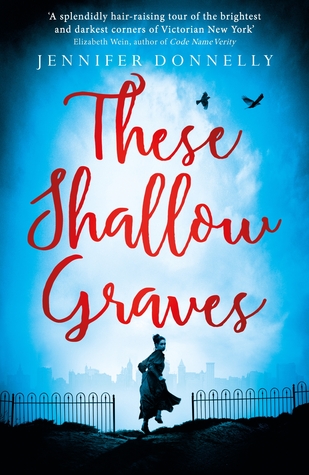 New York, 1890. Josephine Montfort is from one of New York’s most respected and wealthiest families. Like most affluent girls, Jo’s future is set: a comfortable life in a suitable marriage – but her heart can’t help yearning for more.

And then her father is found dead. It was supposedly a tragic accident, although some details don’t seem to add up. Was it really an accident … or worse, murder? With the help of a young reporter, Eddie Gallagher, Jo is in a race against time to find the culprit. Escaping her gilded cage could be dangerous and Jo will have to face some dark characters on the gritty streets of New York. But some secrets can’t stay hidden forever, no matter how deep you bury them.

This book – YA but satisfying for other readers too – works as historical romance, social commentary and as a mystery. It is easy to read and reveals its depth as you go along.

The 1890s New York setting is convincing and upper class Jo, the protagonist, is a very likeable heroine. While Jo is very strong willed and rather rebellious she is still constrained by the social edicts of her situation at that time in history. This is one of the great strengths of the book.

Jo’s life could scarcely be more privileged and comfortable but she has no freedom nor much capacity to choose her own path in life. As one of Jo’s friends puts it – ‘we are allowed no opinions’. To rebel against the marriage chosen for her or to ask questions about her father’s death, let alone befriend someone like Eddie from another class of society altogether would be to bring shame and possible ruin on her family.

But rebel she does and this brings her into contact with other people from the poorer working classes and opens her eyes to social realities. Not least of these is the position of women.

As the book makes clear, women from all strata are constrained and lacking freedom and the secondary characters who illustrate this are just as convincing as Jo. As Jo herself comes to recognise the social realities she becomes less naive and more determined to solve the mystery of her father’s death and to assert her independence.

It should not be thought that the mystery element is lost in these other aspects of the book. On the contrary, the mystery is the framework around which the characters are developed and it is a quite solid mystery. Even though the resolution of the father’s death is a bit predictable there are plenty of plot twists along the way. There is much humour to be found as well. The forensic expert – who would be called a nerd these days – is extremely entertaining, especially in his attempts to flirt with women! A well-written, satisfying novel with a strong feminist message which I would hope is read by many young women.