Thicker than Water by Judith Colquhoun 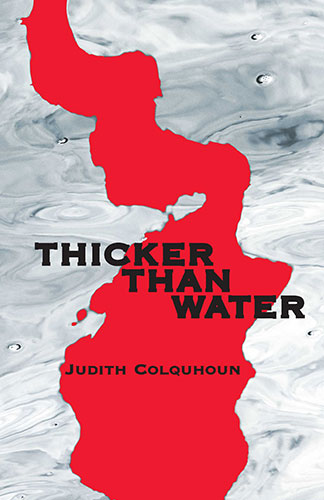 Author: Judith Colquhoun
Publisher: Black Pepper
Copyright Year: 978-1-876044-87-9 (paperback)
ISBN: 2014
Review By: Suzanne Bozorth-Baines
Book Synopsis:
Writers and artists had come here for centuries but she was neither. She was not even seeking a new lover or running away from an old one. No, her mission was altogether different. And the fact that she came in a Boeing instead of a chariot drawn by griffins should not have encouraged anyone to doubt the seriousness of her purpose. Lucy was Nemesis. She had come to settle a very old score.

As her mother Kate lay dying, Lucy O’Connell had learnt of a rape committed in Carlton by a young Italian boy. Not the best introduction to the parent she had never known and, yes, it was a long time ago, but Lucy believes it is never too late for justice.

Wary of the amorous Stefano’s assistance, she battles her way through Italian bureaucracy and finally traces her father, Paolo Esposito, to his restaurant by a beach in southern Italy. There she meets his wife Silvana and her own half-siblings: cheeky Andrea, studious Chiara, scatty Rosaria.

She lives an uneasy lie with this new family. She obsesses over how to punish her father without hurting the others. Violent forces gather. Still she ignores the friends, who insist that penitence can be more real than a mumbled rosary might suggest. That la vendetta is not the work of gods but of devils.

Proof of Judith Colquhoun’s writing ability is spelled out in her 40 year career scriptwriting for television, and her various awards including Life Member of the Australian Writers’ Guild. But she’s given that away to write her first novel, based on a script that never came to fruition. Given that script writing is somewhat different than writing a novel, Judith hasn’t done too bad a job of it, although I wish I hadn’t known she was a scriptwriter. I kept expecting the story to turn into a made for TV book, which wasn’t really the case.

Underlaying this novel, which doesn’t really seem like a crime novel, is the understanding of Italy, the place, and Italy, the culture. When I say it doesn’t seem like a crime novel, there’s no real blood and guts here, but the slow burn of someone who’d like revenge for wrong doing—(how Italian)—and the torturous thought processes of how to take revenge without hurting other people not involved in the matter.

The beauty of the Italian landscape is there, also the garbage. The Italian language is part of it, and of course, food and drink. And, what else but to include a little romance for the main character, not bodice-ripping Italian, but proper nice boy Italian. Also very interesting is the interactions of Australian culture with Italian in some unexpected subplot developments. Judith also refers to the ever present corruption inherent in the Italian way of life even on the simplest scale.

Being of Italian extract myself, and having just returned from Sicily, I could visualise this family, see the intentions and the undercurrents from the slightly underhanded way the matriarchs work, to the vacuous step sister, to the adored little brother. I could understand the excitable tone of the language and the animated hand waving and voices of the speakers. I could smell the ocean, be amazed at the garbage only meters from the gorgeous views, and shake my head at the incomprehensible way corruption is tolerated by communities and families.