Try Not to Breathe – Holly Seddon 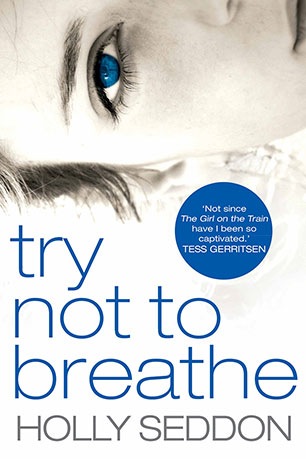 Alex is sinking.  Slowly but surely, she’s cut herself off from everything but her one true love – drink.  Until she’s forced to write a piece about a coma ward, where she meets Amy.

Amy is lost.  When she was fifteen, she was attacked and left for dead in a park.  Her attacker was never found.  Since then, she has drifted in a lonely, timeless place.  She’s as good as dead, but not even her doctors are sure how much she understands.

Alex and Amy grew up in the same suburbs, played the same music, flirted with the same boys.  And as Alex begins to investigate the attack, she opens the door to the same danger that has left Amy in a coma…

This book revolves around four main characters; Amy who is in a coma after being attacked and left for dead in a park; Jacob, Amy’s boyfriend at the time she was attacked; Sue, Jacob’s mother; and Alex, an alcoholic journalist.

Amy is fifteen and is abducted, attacked and left for dead in a park.  She remains in a coma fifteen years later but the offender is still unknown.  Despite the coma, Amy reveals her own story and progressively remembers her past and what led up to her attack.

Jacob is now married to Fiona and they are expecting their first baby.  However, he keeps being drawn back to Amy’s bedside and sits with her for hours, sometimes during work hours and always without the knowledge of his wife and his work colleagues.

Sue and her very handsome husband, Graham, have three sons, Simon, Jacob and Tom.  Sue has secrets but believes that you just get on with life and don’t make waves.

Alex has lost everything through her addiction to alcohol – her unborn baby, her police detective husband Matt and her job.  Her doctor has told her that unless she gives up the alcohol she will be dead within a year.  In an effort to try to control her addiction, Alex is writing a story about people who have been in the coma-ward, of a particular hospital, for many years.  She is hoping to revive her career by selling the story to The Times.  While she is writing the story she is drawn to Amy – they are around the same age and grew up in the same area, probably listening to the same music.

Amy was attacked when she was fifteen and has not regained consciousness fifteen years after the attack.  Alex wants to find out who did this to Amy and get some justice for her.  In her discussions with Amy’s doctor, Alex discovers that although in a coma, many of the patients are still able to communicate and Amy is one of the patients that the doctor is communicating with.  This theme is developed and eventually plays a role in identifying Amy’s attacker.

Try not to breathe is well written and interesting in that each main character has their own voice, through which they reveal their own story.  Amy is unaware that she is in a coma.  When Alex is speaking to her she has no idea who Alex is and believes that Alex is visiting the wrong Amy.  However, Amy begins to enjoy Alex’s visits.  Jacob is obsessed with visiting Amy looking for answers that, in her current state, she can’t give him.  However, Jacob can’t explain why he has this need to keep visiting Amy and keep his visits a secret from everyone, including his wife and mother.  Alex is driven to find out who did this to Amy and seeks the help of her ex-husband, Matt, despite the hurt that contact with him causes her.  Alex discovers that Matt is with another woman and they are expecting a child.  Alex’s methods are not always ethical but in her mind ‘the end justifies the means’.  In her effort to get justice for Amy, she pushes others to their limit.

This is a book of fiction but Holly Seddon drew on the groundbreaking work of the Royal Hospital for Neuro-disability as inspiration for her plot.  Seddon has successfully woven together the individual stories of the four main characters.  The end product is a well-paced novel that draws all the threads together to a gripping and successful conclusion.