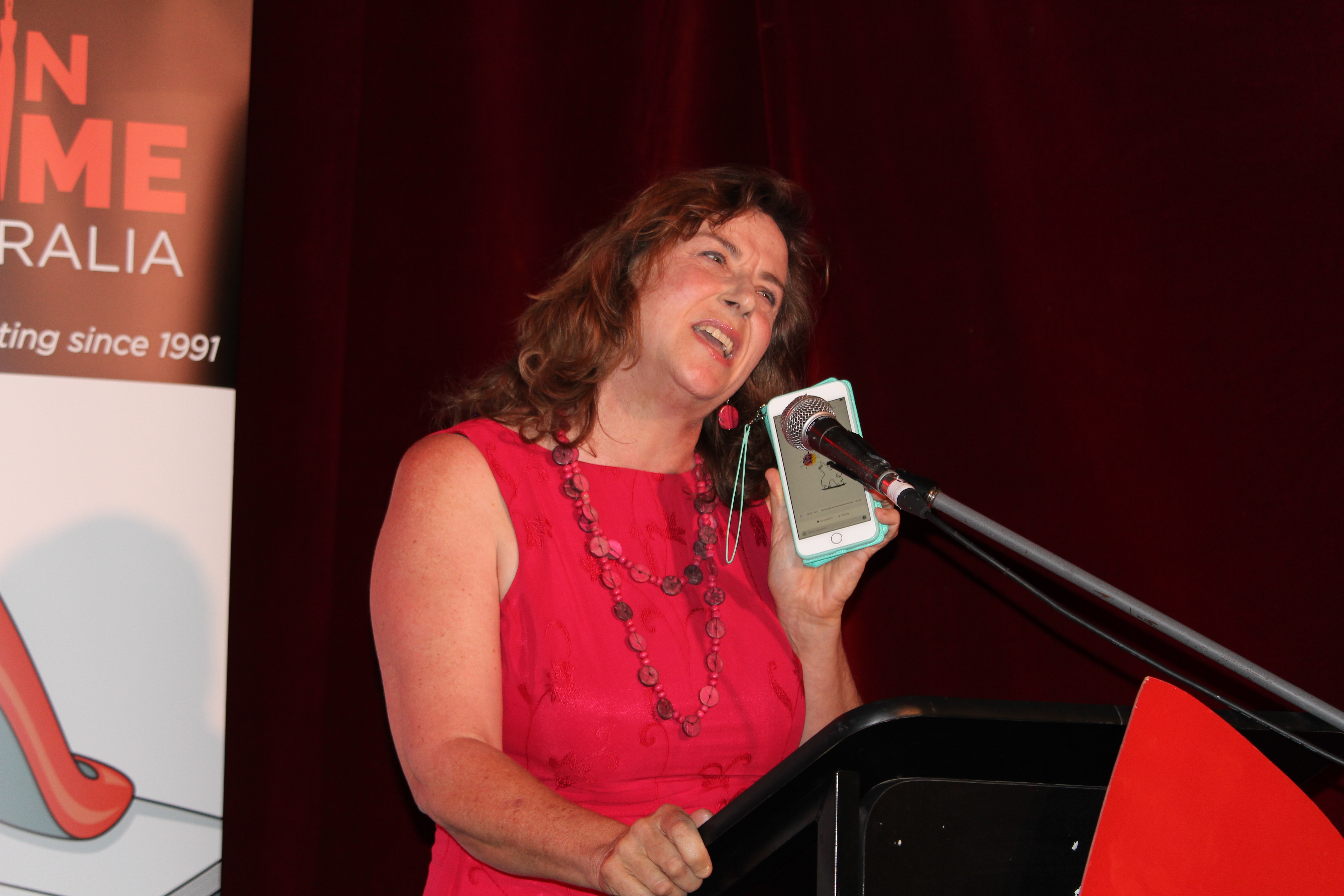 Jane Sullivan, The Age literary columnist,  attended the 25th Scarlet Stiletto Awards ceremony on 24 November and featured the awards in her Turning Pages column in Fairfax Media on 8 December.

There’s  something kick-arse about red shoes. No wonder Julie Bishop donated her Cabinet resignation footwear to the Museum of Australian Democracy. And then there’s the power of the red killer heel.

Emma Viskic’s gritty And The Fire Came Down, the second in her series about deaf detective Caleb Zelic, won the fiction prize at the 2018 Davitt Awards. Credit Eddie Jim

This was the brainwave of Cate Kennedy, winner of the first two Scarlet Stiletto awards in 1994 and 1995, who like quite a few other winners has gone on to success as a published writer. Stilettos are all very fine, but as she pointed out, writers need something more comfortable when they’re working. As she was a size 11, the only stilettos that fitted her were thigh-high patent leatherboots designed for drag queens. So she came up with a new award, the Scarlet Scuff: a low-heeled slipper mounted on a packet of Tim Tams.

Her invention went down a treat with the hundred or so Sisters who came from across the country to Melbourne for the recent awards ceremony. Kennedy and actor Kate Atkinson, who plays the prison governor Vera Bennett in the TV series Wentworth, were theguests of honour, and together with MC Jane Clifton they handed out 13 awards.

Winner of the coveted Scarlet Stiletto, the top prize, was Philomena Horsley, who has a useful profession for a crime writer: she’s a medical anthropologist specialising in autopsies. It was her first attempt at fiction writing, but if she’s anything like previous prize winners, she may branch out into a career in crime. For every year of the award’s 25-year history, at least one winner has gone on to have a book published.

Today we’re riding the crest of a female crime wave, with Australian writers such as Jane Harper, Liane Moriarty, Emma Viskic, Sulari Gentill and Candice Fox (to name just a few) finding success at home and in international markets. But these breakthroughs didn’t come out of nowhere. They were made possible by decades of tireless campaigning from the Sisters, to show that the girls could write crime just as well as the boys – or better.

Long before the Stella Prize, the Sisters were championing fictional and non-fictional crime books written by women through their annual Davitt Awards. This year I was a judge, and I read some fascinating and diverse books. I particularly remember Emma Viskic’s gritty And The Fire Came Down, the second in her series about deaf detective Caleb Zelic, which won the fiction prize; and the non-fiction winner, Gabriella Coslovich’s Whiteley on Trial, which took a fiendishly convoluted case of alleged art forgery and turned it into a riveting read.

Another highly ingenious groundbreaking book was Sulari Gentill’s Crossing the Lines,and I was pleased to see it won this year’s Ned Kelly award.

With the Scarlet Stilettos featuring promising newcomers such as 15-year-old Olivia De Lesantis, who took out the young writers’ award, we can look forward to a furtherflowering of deadly female talent.

At the awards night, Cate Kennedy got us all singing her defiant new rendering of the Nancy Sinatra song These Boots Were Made for Walkin’, inspired by the late V. S. Naipaul’s notorious disdain for women writers. “These shoes were made for writing,” she sang, and “One of these days these shoesare gonna write the pants off you.”