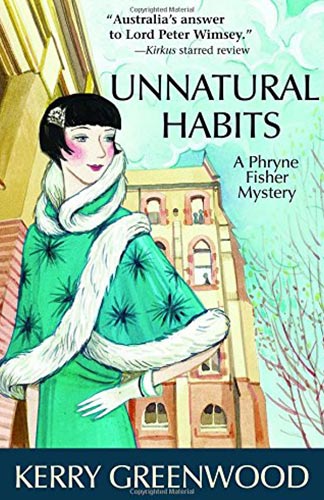 Author: Kerry Greenwood
Publisher: Allen and Unwin
Copyright Year: 2012
No of Pages: 334
Review By: Angela Savage
Book Synopsis: Explaining his reason for wrapping up the Kenzie-Gennaro series, Dennis Lehane allegedly says, “Have you every heard anyone say ‘The seventeenth book in the series was my favorite’?”

The central plot concerns the disappearance from Melbourne of a swathe of golden-haired girls, some of them pregnant, and the ambitious but not at all streetwise girl reporter who has taken it upon herself to investigate. But as Ms Greenwood has explained, her reading often takes her off on tangents and there are several subplots involving the ‘gentlemen only’ Blue Cat Club, a separatist women’s commune in Bacchus Marsh, and a vigilante who is going around anaesthetising abuses of women and sterilising them while they are under.

In addition to the usual appeal of Phryne Fisher novels – the sparkling heroine and her loyal entourage, the insights into the Melbourne of 1929 rendered in loving detail – I was particularly interested in the stories surrounding the Abbotsford Convent, where wayward young women, some of them pregnant, were sent to work in the laundries. I had a great-aunt who was a nun at the Convent (now an arts precinct) in the 1970s. We used to visit her often, and I have fond memories of ‘the Magdalens’, women in their 50s sent away to the convent as wayward girls and never claimed by their families. These women spoiled us kids rotten; it wasn’t until years later I realised they may well have had their own babies taken from them and adopted out.

I also enjoyed the insight into Melbourne’s queer history, afforded by the role of the Blue Cat Club in the narrative. The site of this former members’ only club is on the corner of Centre Place (formerly Calico Alley) and Flinders Lane in Melbourne’s CBD near where I work, and I love imagining it in its former glory: all crystal chandeliers, marble copies of the Apollo Belvedere and the David, and in the air ‘the scent of patchouli, so favoured by dear Oscar.’

Author PM Newton once described Phryne Fisher novels as ‘cosies with teeth’, which is particularly apt in the case of Unnatural Habits, given what Phryne does to her lover Lin Chung after witnessing the appalling conditions to which the ‘bad girls’ in the laundries of the Abbotsford Convent are subjected.

There is a darker shade to Unnatural Habits and in my opinion, it becomes the Hon Miss Fisher very well.