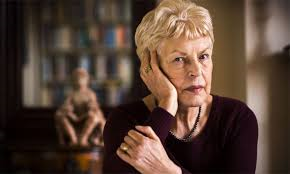 UK crime writer Ruth Rendell, creator of the Inspector Wexford series, has died at the age of 85, following a stroke in January.

Rendell, who also wrote psychological thrillers under the name of Barbara Vine, was the author of more than 60 novels.

Her rival and great friend, P D James, died in November. Both were in the House of Lords, James appointed by the Tories, Rendell by Labour.

The Guardian carried a tribute by Scottish Queen of Crime (and great friend of Sisters in Crime Australia), Val McDermid.

“Ruth Rendell was unique. No one can equal her range or her accomplishment; no one has earned more respect from her fellow practitioners,” McDermid said.

“The broad church that is current British crime writing owes much to a writer who over a 50-year career consistently demonstrated that the genre can continually reinvent itself, moving in new directions, assuming new concerns and exploring new ways of telling stories. And doing it all in a smoothly satisfying prose style.”