What Came Before by Anna George 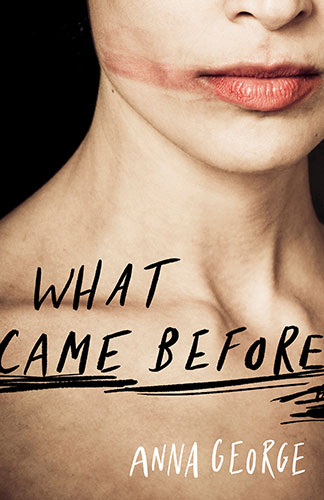 Author: Anna George
Publisher: Penguin
Copyright Year: 2014
Review By: Anne Elizabeth Buist
Book Synopsis:
‘My name is David James Forrester. I’m a solicitor. Tonight, at 6.10, I killed my wife. This is my statement.’
In Melbourne’s inner west, David sits in his car, dictaphone in hand. He’s sick to his stomach but determined to record his version of events. His wife Elle hovers over her own lifeless body as it lies in the laundry of the house they shared. David thinks back on their relationship – intimate, passionate, intense – and what led to this terrible night.
From her eerie vantage point, Elle traces the sweep of their shared past too. Before David, she’d enjoyed a contented life – as a successful filmmaker, a much-loved aunt and friend. But in the course of two years, she was captivated and then undone by him. Not once in those turbulent times did she imagine that her alluring, complex husband was capable of this.

This book is an impressive debut from Melbourne lawyer Anna George.
It has one of the best opening pages to any of the thrillers I have read recently—and openings are so important! I was immediately pulled in and kept reading it until I was finished—it has 254 pages which I think makes it about 70,000 words (I also have it on kindle but can’t for the life of me work out how to get a word coutn), so not a long book and can be read over a day or two (I am a quick reader though). It starts in third person close from David Forrester’s point of view—the murderer. No I am not doing a spoiler, he tells us this (rather compellingly) in the first sentence. But we do get to hear from his wife Elle (who he confesses to murdering) as well as her friend’s point of view as we go back in time and move forward.
George tackles an important topic, Domestic Violence, and references recent relevant local cases. It is a Gone Girl type of story though she has been writing (and I’m sure thinking) about it for a long time. It’s a “his / hers” version of events (I’ll try not to do a spoiler); after a fairly nasty and terminal type of event there are moves between past and present.
It’s competently written, though at times the tense can be jarring. There is well observed psychopathology, and it is hard to avoid being dragged in even though you know there will be no happy ending. I had to keep reading regardless! We as the reader experience what I am sure many family and friends of Domestic Violence victims do—the frustration of why are you going back?—and that you (Elle) is worthy of more. This is not set in a lower working class and the protagonists were not as far as we know victims of ghastly childhoods. They are intelligent, well-educated middle class lawyers—and for those of us who read about the James Ramage case then it is chillingly believable. Things aren’t exactly as we think they are though, with a twist at the end, and an ever increasing race—or rather spiral down to the end. It’s more psychological drama rather than thriller, but is a compelling read