Why Did They Do It? – Cheryl Critchley and Dr Helen McGrath 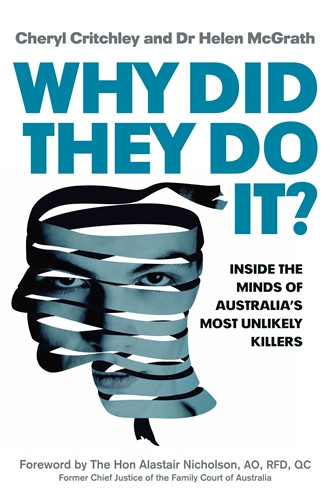 The cases that stunned Australia – and left us all with one question: why did they do it?
Gerard Baden-Clay was described as charming and successful, with a picture-perfect life, until he murdered his wife, Allison. John Myles Sharpe killed his pregnant wife and their young daughter with a spear gun. Simon Gittany flung his fiancée off the balcony of his upmarket inner-city apartment, having proposed lovingly to her, in public, just two months before. These and other crimes, committed by people described as average, ordinary, normal…

Katherine Knight told her brother: ‘I am going to kill Pricey and I am going to get away with it. I’ll get away with it ‘cause I’ll make out I’m mad.’ Former abattoir worker Knight did kill her husband, stabbing him at least 37 times before skinning and beheading him. But why?

Some murders are so horrific, the perpetrators must be insane. Surely? Bad or mad? Why Did They Do It examines 10 infamous Australian murders including that of Gerard Baden‑Clay whose murder conviction was recently reinstated by the High Court. In each case study, the perpetrators failed to meet the legal criteria for ‘insanity’ under the McNaughton’s rule. They clearly understood right from wrong; the killings arose from a deadly combination of personality and choice.  Personality disorders are not uncommon so it’s unnerving to read the similar motives behind such crimes, committed by people who look so normal.

Professor Helen McGrath, psychologist, adjunct professor at Deakin University and author/co-author of numerous books on psychology teams up with Cheryl Critchley, investigative journalist and author with an interest in psychology to examine the motives behind some of Australia’s most horrendous crimes.

The book is divided into four sections, each section dedicated to a type of personality disorder: Avoidant, Narcissistic, Borderline and Anti-Social. Typical behaviours associated with those disorders are set out along with ways to recognise a particular disorders. Each case study has a diagnostic chart comparing examples of the killer’s behaviour to indicators in the Diagnostic and Statistical Manual of Mental Disorders of the American Psychiatric Association. We all possess these characteristics to some degree, but I found it unsettling to recognise a few of those indicators in friends, family and myself.

I was chilled to read how Robert Farquharson drove his three boys into a dam, but I was particularly disturbed by the callousness of John Myles Sharpe who shot his pregnant wife with a spear gun then four days later turned the weapon on his young daughter. Both men fit the category of avoidant personality disorders, inadequate and possessing scant social skills

Olympic water polo champion Keli Lane disposed of her daughter Tegan two days after the girl’s birth and that day attended a wedding. Tegan’s body has never been found. Why did she do it? Lane along with Baden-Clay fit the criteria of narcissistic personality disorder ‘characterised by a pervasive pattern of grandiosity, a constant need for admiration and a lack of empathy for others.’

People with anti-social personality disorders lack empathy and conscience. Simon Gittany threw his fiancée from the 15th floor of an apartment block and Adrian Bailey, killer of Jill Meagher, are classic examples of the disorder. People with this personality disorder do not learn from mistakes, so repeat their actions. Perhaps Jill Meagher’s murder could have been prevented if Bailey was diagnosed earlier.

Why Did They Do It is a difficult read. At times, I wanted a little more depth from the book, but overall it was a hard to put down. I was horrified yet compelled to read on. For lovers of the true crime genre, it’s an interesting read, but be prepared for a bumpy ride.